A gun I got interested in when it was first announced over a year ago is the CZ EVO 3 S2 Scorpion Micro with telescoping PDW-style brace*. This is a shorter, lighter version of the Scorpion carbine and pistol.

CZ's web page for the "pistol" is here.  A good video overview is here.

In light of ongoing leftist violence and especially after the recent Poway, CA Chabad shooting, I decided that having a PDW that'll fit in a laptop bag might be a good tool to have. The Scorpion Micros are still hard to find but I found some on Gunbroker and decided to get one. They are still selling for about MSRP and I don't expect that to change until supply catches up with demand. I took delivery from my FFL last Friday. 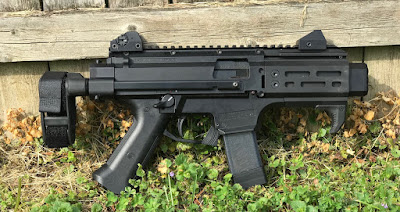 I have an old Dell laptop briefcase. The gun fits in it with a 32 round magazine inserted. 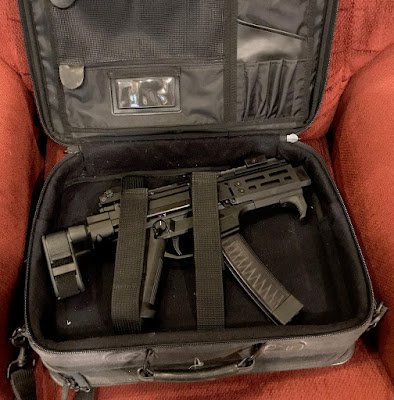 Fit and finish on it are excellent. Field stripping is easy. By pretty much all accounts, the larger Scorpions are extremely reliable guns. I'm expecting this one to be as good. What makes it a "Micro" is just a shorter barrel (4.12") and handguard. The action is the same as the larger models.

It came in a cardboard box with manual, warranty card, pull-through bore cleaner, gun lock, two 20-round mags, and an Allen key.

In reading up on the Scorpions, I found complaints about three things: the trigger pull, that the safety lever interferes with one's trigger finger when shooting, and the grip. The trigger pull on mine is creepy and over 8 lbs., so I've ordered an HB Industries spring kit and will do a trigger job. Maybe it's my small hands but the safety lever seems fine to me, as does the grip.

I also ordered from HBI a paddle mag release and extended charging handle, which will go on the right side, since I'm a lefty. I also plan to put a red dot sight on it.

When I ordered the Scorpion I also ordered two Manticore Arms 32-round magazines from Prepper Gun Shop. They arrived the day before the gun.

Today I got it to the range despite the rain. Thankfully, my range has a covered firing line. The crummy weather let me have the place to myself, which was really nice.

A pic of the gun with the factory and Manticore magazines: 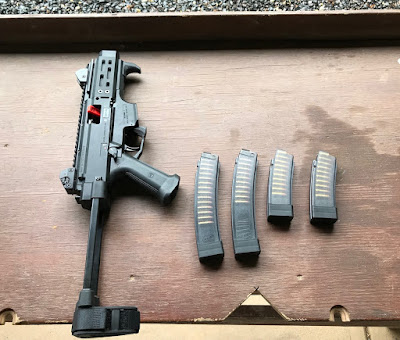 Closeup of the feed lips of the Manticore (L) and factory (R) mags: 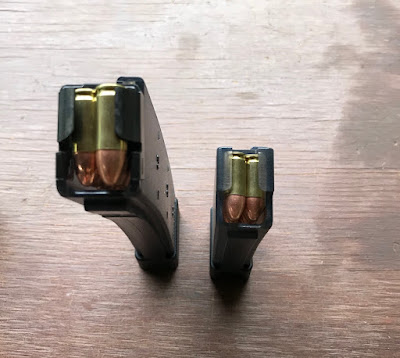 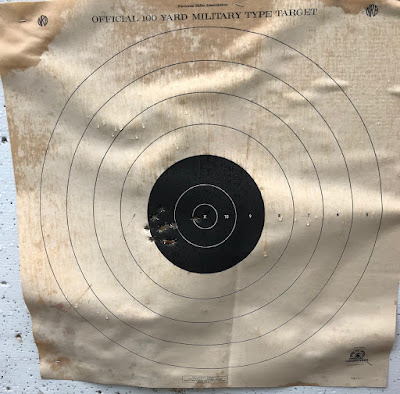 I moved the rear sight 13 clicks to the right to center the POI. After it was zeroed I used up the rest of the ammo banging steel on our 25 yard plate rack.

All told, I put 180 rounds of CCI 9mm 115 grain FMJ Blazer Brass through the CZ. There were no malfunctions. As a lefty, I find that a lot of straight blowback operated guns will send gun schmutz into my face and the CZ is no exception. It's not bad and something you get used to, but it reinforces the need for eye protection.

The sights are a bit low to come up naturally, and like my stocked Mauser C96, seeing the front sight can sometimes be difficult with 50 year old eyes. The gun will definitely get a red dot sight.

The outside of the faux suppressor got only slightly warm to the touch.

I ordered more of the steel-lipped Manticore magazines. Speaking of which, a Maglula is recommended for them unless you have strong thumbs. I found that once I got to about 22 rounds in them, it became very difficult to load more.  https://amzn.to/2VhcE3a

Overall, I'm very pleased with the Scorpion Micro. It's going to be both a fun shooter and a serious defensive tool.

Posted by Dave Markowitz at 4:20 PM