Over on Arfcom’s Survival Forum, “Johnnyutah” posted an AAR about his experience after dealing with nearly 11 days without power caused by the mid-Atlantic derecho of June 29, 2012. It’s worth reading.

Posted by Dave Markowitz at 9:17 PM No comments:

When cycling the gun empty at home  the action felt pretty smooth. However, once I loaded it up it became evident that there were some burrs in the action. In particular, the S&B .357s were hanging up when trying to load them into the chamber. There were a couple burs on the breech face, alongside the ejector slot. After about 20 shots I took a needle file and knocked them down a bit. I worked through 50 rounds of .357 plus 10 rounds of .38 (which fed smoothly). After about 60 rounds the gun was noticeably smoother and I was able to do rapid mag dumps.

The S&B .357s were loaded with a truncated cone bullet, while the Winchester .38s had bullets with more of a curve to the ogive, basically a RNFP with a hole in the tip. The gun seems to feed better with a more rounded bullet profile so I'll try to use that sort of ammo in the future.

I am going to have to tweak the ejector a bit. Ejection of .357 brass was positive but when trying to eject the last .38 in the gun, the empty case stayed in the receiver every time.

When shooting .38s I also experienced one time when the cartridge on the carrier ejected from the gun along with the empty.

After about 60 or 70 rounds I noticed the bolt pin stop screw on the left of the reciever was loose. It will get some Loctite.

The trigger is good. Probably about 5 or 6 pounds and crisp, with very little creep.

I shot the gun at 50 yards, mostly with my arms rested on a shooting bench. The gun will group into about 3" with the loads I shot today. With the rear sight set on the lowest position it shot a few inches high and about 2" left. Since it was pretty close I didn't adjust the sights today, concentrating more on functioning.

Aside from making sure the ejector is not binding on anything and is properly shaped, I plan to strip the gun and polish the wear points to slick it up (but I will NOT be touching the locking bolts, which set headspace). I will also probably replace the plastic magazine follower with one made from steel, and replace the ridiculous bolt-mounted safety. Finally, I'll be giving the stock some attention to make it look nicer. Whatever finish Rossi uses on their wood comes out really dull.

Overall I'm pleased with the Rossi. It's a light, quick handling rifle in a useful caliber at a reasonable price. With a little "fluff and buff" it'll have a really slick action.

Posted by Dave Markowitz at 9:10 PM No comments:

I recently joined Langhorne Rod and Gun Club. It looks like this going to be hazardous to my wallet because it's very close to the shop, Surplus City, where I get most of my guns. I stopped there yesterday after going shooting and he had a couple Rossi 92s on the shelf. One blued .357 and one stainless .44 Magnum. Continuing the cowboy gun kick that I've been on, the .357 came home with me. $459.95 OTD.

Back in the days of the Old West, having a rifle and pistol both chambered for the same cartridge simplified logistics for people out on the frontier. The most famous pairing was a Winchester M-1873 and a Colt Single Action Army sharing the .44-40 WCF cartridge. Winchester continued the trend when they introduced the Model 1892 in .44-40, .38-40, and .32-20. The concept fell out of favor for a few decades but regained popularity in the 1960s and nowadays, the most common pairs are in .357 or .44 Magnum. The .45 Colt has been made available in leverguns in the past 15 years or so, and even the .44-40 has become popular again with the growth of cowboy action shooting.

Aside from logistics, lever action rifles chambering what we now consider pistol rounds make a lot of sense for many modern shooters, especially the carbines in .357 Magnum which can also shoot .38 Special.

.38 Special and .357 Magnum are widely available and relatively inexpensive. They are very easy to handload for and have mild recoil. Many indoor ranges will allow you to shoot rifles chambered in them, but not rifles in “real” rifle cartridges. This is important in our increasingly urban society.

Out of a rifle barrel the magnum handgun rounds pick up a lot of steam. E.g., the bullet fired from a 20” .357 carbine will gain several hundred FPS in MV, compared with a revolver, and will have approximately as much energy at 100 yards as one fired from a revolver will at the muzzle. (See the tables near the bottom of the page, here, for example.)

In the late 19th/early 20th Century, the lever action rifle was one of the premier choices for a defensive weapon. Even today, with AR-15s and AK clones easily available, leverguns fill this role well.

A .357, .44 Mag., or .45 Colt lever action carbine is light, handy, and can be stored with a full magazine and empty chamber, but is very fast to get into action. As noted above, the magnum rounds especially get a real boost from the rifle length barrel.

For several decades the Brazilian gunmaker Rossi has offered a copy of the Winchester Model 1892. Several years ago I had one imported by EMF, an 1892 Hartford Model Short Rifle with a 20” octagon barrel in .357. It was a nice shooter and I’ve been kicking myself for trading it off.

The wood is nondescript but is fitted well.  My dad owned a Browning B92 .357 when I was a teen, and it sure doesn't look as good as that, though.

This is a view of the safety that Rossi came up with. You can also see the Taurus integral gun lock on the back of the hammer. The two silver colored pieces are the locking bolts.

I find the safety ugly and obnoxious. With proper gun handling it is unnecessary.

After I confirm that the rifle works properly, I'll order a plug that's made to replace the safety so that the gun is closer to the way that John Moses Browning designed it. An alternative is an elevation-adjustable peep sight that takes its place; windage is adjusted by drifting the front sight in its dovetail. Steve's Gunz sells both items.

The peep sight paired with either a fiber optic or a large bead front sight should make a good combination for fast sight picture acquisition.

The action is already pretty smooth. As long as the Rossi functions OK I don't think I'll do any tuning on it, except by working the action and shooting it.

Two or three years ago Rossi was bought by their fellow Brazilian gunmaker, Taurus. Since then, the Rossi 92s have incorporated a gun lock built into the hammer, originally designed for Taurus’s revolvers. As with the safety, I'd rather not have the gun lock, but IMO the Taurus design is one of the better ones. It's unobtrusive and I haven't read of any cases where it's been accidentally activated. That said, I'm going to put a drop or two of boiled linseed oil on it to make sure (BLO is nature's Loctite).

I plan to pick up some Watco Danish Oil in medium walnut color. I saw the before and after pics of what a single coat did to a similar Rossi stock, and it was incredible. The wood went from very "meh" to really nice looking.

The only other addition I plan to make is a set of sling swivel studs so I can attach a quick detachable sling when needed.

After I shoot the Rossi I'll post a range report.

Posted by Dave Markowitz at 9:58 AM 3 comments:

The derecho which swept through the American Midwest and Mid-Atlantic states on June 29, 2012 should serve as a reminder to those of us in areas where such violent weather is rare, the we should still be prepared for it.  This storm was massive, and caught virtually everyone by surprise.

My family was fortunate in that we didn’t suffer any damage or power outages. Many folks not too far from us weren’t so lucky. 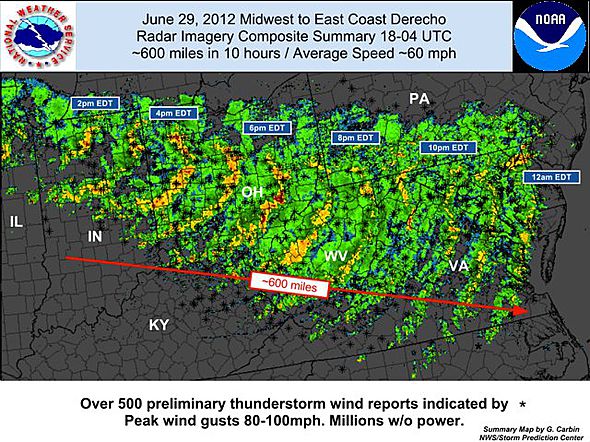 Five days after the storm, millions remain without power. In the aftermath, Newt Gingrich tweeted that this would be a small taste of what an EMP could do. Based on my own research, the likelihood of an EMP attack taking out the infrastructure in a large part of the country is low. However, a Carrington Event-type EMP would cause widespread, long lasting damage.

Here are ten things you can do to prep for violent weather:

Obviously, there’s a lot more you can do but this list is a good starting point.

Posted by Dave Markowitz at 1:01 PM No comments: