One type of rifle missing from my arsenal has been a centerfire bolt action with a proper southpaw bolt for deer hunting and informal target practice. I have a slew of military surplus bolt actions, but of course the bolt is on the wrong side for me. My club has an annual World War II-themed practical rifle match in which I usually shoot my 1944 Fazakerly No.4 Mk.I, with which I can hold my own against the Garand shooters, but reaching over the top to work the bolt gets tiring after awhile.

Therefore, back on March 5th I ordered a left handed Ruger Gunsite Scout rifle from Bud’s Gun Shop, specifically the stainless model 6821 with an 18.7” barrel. It finally arrived at my FFL yesterday so this morning I played hooky from work to go pick it up, then took it to the range.

To me the Ruger GSR is sorta a 21st Century No.5 Mk.I Jungle Carbine -- a short, full power bolt action rifle with a detachable mag, and a flash hider. Additionally, it has a threaded muzzle to allow you to attach your choice of flash hider, muzzle brake, or suppressor.

I have a No.5 Mk.I (a real one, not a converted No.4) and while the concept was great, the execution was horrible. The stock design is an absolute abomination. I don't know what kind of dope the designers were smoking, but the recoil pad acts as a recoil enhancement pad, because its dimensions are smaller than the wood part of the buttstock. The No.5 handles superbly but recoil is vicious.

The Ruger’s workmanship is good and the checkering on the laminated wood stock is well done. I like the look of the stock and while it won't be quite as rugged and weatherproof as one made of plastic, it'll do for my needs and is much better than a wood stock in that regard.

The rifle came with a single 10 round metal magazine, a thread protector for the muzzle for if you want to remove the factory flash hider, two extra spacers for the stock, a set of Ruger scope rings to fit the receiver's integral bases, and a gun lock. Along with the rifle I'd ordered one each of Ruger's 5 and 10 round polymer mags. Here it is with all three magazines and still wearing the factory rail and rear sight: 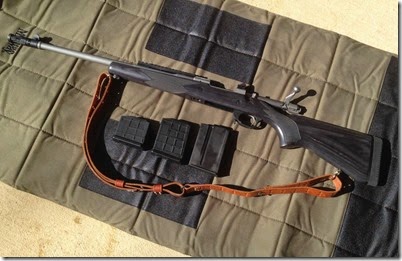 In the pic, the rifle is also wearing the M-1907 sling I used on my Garand, when I shot Service Rifle back in the ‘90s.

The bolt is still a bit stiff and will never be as smooth as a Lee-Enfield, but it's nice to have it on the left side. Unusually for a Ruger, the trigger pull out of the box was quite good. I'm guessing it's about 4 pounds with no creep.

Close up of the factory rear sight and rail: 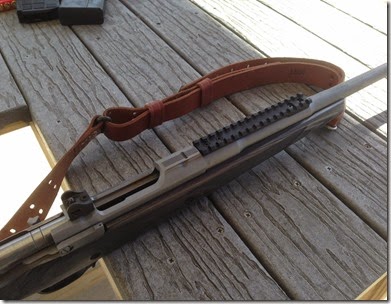 Close up of the right side of the receiver with the XS rail mounted, showing the XS ghost ring BUIS: 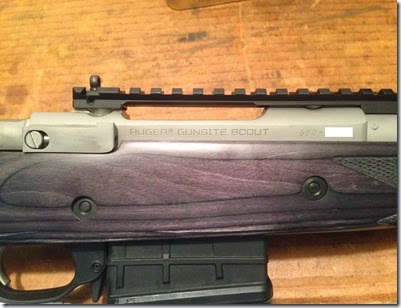 The stainless barrel is medium weight with a step, reminiscent of military Mauser barrels. The rifling twist is 1 in 10 inches, and from what I've read in several online reviews it tends to shoot heavier bullets (e.g., 168 to 175 grain) best.

The Gunsite Scout doesn't quite meet Jeff Cooper's criteria for a scout rifle. It's a little overweight and a few inches too long. It's also missing the ability to load using stripper clips, but makes up for that IMHO by using detachable box magazines. Regardless of whether it fits Cooper's definition, the Gunsite Scout is a very handy rifle and I wouldn't want it any lighter. (As an aside, I'm not sold on the scout rifle concept, particularly the intermediate eye relief scope. I found a good critique here.)

Before taking the GSR to the range I brought it home, snugged up all the screws, and ran a couple patches through the bore.

The factory iron sights are very serviceable and the first 10 shots through the gun were with the OEM rear sight in place. However, I'm going to mount a scope in the conventional position over the receiver, so after shooting 10 rounds, I replaced the factory rail and rear sight with an XS Sight Systems rail meant for the GSR. It has a ghost ring peep sight built in, so you don't lose the BUIS functionality of the Ruger rear sight.

I got the sight on the XS rail zeroed at 100 yards and managed to whack a torso-sized gong a few times at 200 yards (all shooting from the bench with my elbows supported. I think one of my friends has my Hoppe's rifle rest).

Recoil is brisk but nowhere near as bad as a No.5 Jungle Carbine. The Ruger recoil pad is pretty good. I like the ability to change the length of pull by adding or removing spacers. Since I'm short, I removed the spacer installed by the factory. Ruger provides with the rifle an Allen wrench that fits the two screws holding on the recoil pad and spacers.

Here’s the GSR with the 5 round magazine after I installed the XS rail: It will be getting a scope in quickly detachable rings shortly, and I'll be getting setup to handload .308, especially some reduced loads for less recoil. My father gave me a box of several hundred (at least) .308 150 grain FMJ flat base bullets originally intended for a Garand, but I also plan to try some heavier cast bullet loads.

The scope I’m planning to eventually get is a Burris Fullfield 1-4x TAC-30 in QD mounts. I have on one of my AR-15s and I’m very pleased with it. Light transmission is good, the glass is clear, adjustment clicks are precise, and the reticle is illuminated. The 4x max magnification is plenty for my needs. Plus, it’s $299 on Amazon Prime. (As an aside, why are the only scout scopes with illuminated reticles a $600 Leupold and a cheapy from NcStar? WTF? It’s 2015 fer crissakes.)

Some folks have criticized the GSR as not meeting the strict definition of a Scout Rifle as propounded by Jeff Cooper. For example, it’s a little too long, a little too heavy, and can’t be loaded with stripper clips. However, whether it meets Jeff Cooper’s definition of a scout rifle doesn’t matter for me. In fact, given Cooper’s description of a scout, one may wonder if the whole idea isn’t based on some kind of romantic fantasy of the role of a rifleman.

The likelihood of me emulating Sir Richard Burton or Daniel Boone is minimal. Regardless if the scout as envisioned by Cooper a real thing, the GSR is a compact, easy handling, and powerful rifle suitable for putting lead on target out to reasonable hunting or defense ranges. It would serve well riding in the gun rack of a ranch truck, as a hunting rifle in deep woods, or a patrol rifle for a game warden or wilderness cop.

Overall I'm quite pleased with the Ruger Gunsite Scout after one range trip. Once I get a scope on it I'm looking forward to finding out what loads it likes, and hopefully taking a deer with it this Fall.

Posted by Dave Markowitz at 5:31 PM No comments:

Vehicle Safety Tip: Keep a Set of Spare Wiper Blades in Your Car

For the second time since I started driving I had to replace a windshield wiper while away from home, before I could drive anywhere.

After work and getting off the train tonight and getting back to my truck, I started to clear the windshield of a sleet accumulation. I was a bit careless and managed to hit the driver's side wiper blade with my scraper, and bent it, breaking a plastic piece. Thankfully, I had a set of spare blades in the box that I keep in the back of my Xterra. What could have been a major PITA was just a minor inconvenience.

The first time I had to change a wiper blade while away from home was about 20 years ago, during a commute to law school. I was driving during a snow and ice storm, and the driver's side wiper ripped. I had spares with me so I pulled over and changed it.

When I change my wiper blades as part of ordinary maintenance, typically what I'll do is rotate out the ones I kept as spares, then put the new blades in my truck box. That way the spares don't get too old and possibly dry rot.
Posted by Dave Markowitz at 7:49 PM No comments: