I need to get a Foodsaver.
Posted by Dave Markowitz at 11:04 AM No comments:

The other day I ordered a Lixada wood gas stove using an Amazon gift card. This stove is sold under a number of different brand names on Amazon and eBay, generally for a bit under $20. The stove is made from stainless steel and has the following components, which nest together:

Along with the stove itself a nylon mesh bag was included for storage and transport.

Since I had some time this afternoon I decided to give it a try, using some sticks from my yard. The stove did not come with any instructions but I'd read up on them online. Supposedly, they work best with the combustion chamber filled with sticks oriented vertically, burning top-down.

I used a piece of dryer lint/paraffin wax fire starter to get it going. 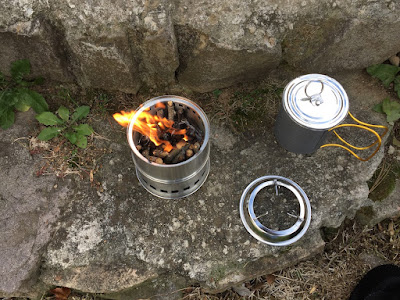 After a few minutes the wood gas that's released by the burning wood gets flowing through the sidewall, comes out the interior holes and ignites. 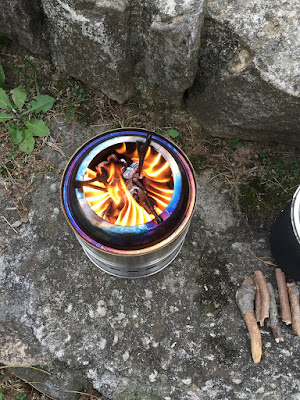 Shortly after it got going I put my Olicamp Space Saver Cup with home made lid on top. I had 12 oz. of water in the cup to make some tea. 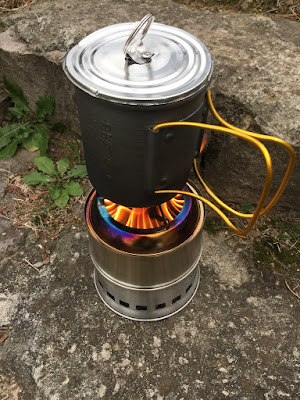 A couple things caused my boil time to be overly long (i.e., damn near a half hour):

As long as I kept it fed so that the wood gas was being burned it was pretty much smoke free. If I let it die down and then added fuel, it was smokey.

The idea of a stove for which you can forage fuel is very attractive for camping, hiking, and bugouts. I need to play around with it a bit more to get the knack of minimizing cook times. In particular, one fuel I want to try is charcoal briquettes, which we keep up at my friend's place where we camp a few times each year. Another fuel which other owners have reported works well are wood pellets, as used in pellet stoves.

I'm planning to follow this up with a video, once I get the raw footage edited.
Posted by Dave Markowitz at 4:36 PM No comments:

I wasn't satisfied with using a screw and nut to secure the handle to the DIY lid I made for my hard anodized Olicamp cup, so I ordered a Tandy Leather rivet kit earlier this week. It was delivered today. The lid now looks like this: 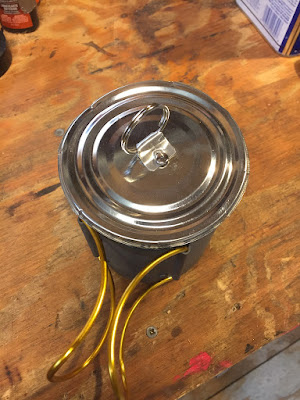 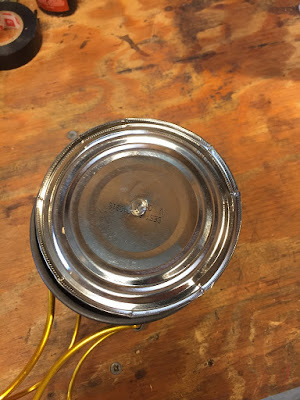 The stud part of the rivet was longer than I needed, so I trimmed it with dykes before setting the head.

The rivet should be more secure in the long term than the screw and nut, and easier to clean if food gets on it.

I can see the rivet kit coming in handy for future projects.
Posted by Dave Markowitz at 12:38 PM No comments:

The other day I ordered an Olicamp hard anodized aluminum Space Saver cup from Amazon using some points. It arrived today and I think it'll be a good piece of gear. It's lightweight and has graduations so that you can use it for measuring water.

One thing it lacks, however, is a lid, which means that if you use it as a pot to cook or boil water in, it'll take longer and use more fuel. I've used expedient lids made from aluminum foil in the past with my GSI stainless cups and USGI canteen cup. I wanted something better for this cup.

My first try was made from aluminum flashing. I traced the lip of the cup on a piece of scrap wood to create a form, and cut a piece of flashing a bit larger around than the cup. I then secured the flashing to the form and pressed it around.

In search of a better solution I ran across this video by IA Woodsman, in which he made a lid for a stainless GSI cup from the bottom of a 12 oz. coffee can. I had an empty can so I went back out to my shop and made a similar lid. 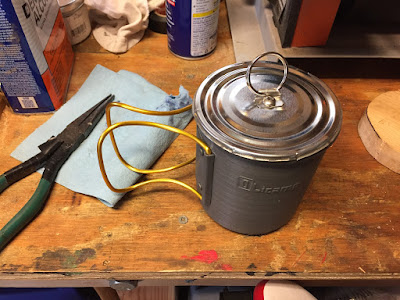 The lip of the aluminum Olicamp cup is a little larger in diameter than the stainless GSI cups, so I cut eight small slits around the edge of the lid so I could spread it out to better fit on the cup. Instead of IA Woodsman's copper D-ring, I used a stainless steel split ring from my scrap box. Click on the picture to see the full sized version which shows how it can be set so that it doesn't flop over.

The ring is secured using a similar tab to IA Woodsman's. However, I used a stainless screw and nut instead of a rivet.

I'll probably carry the cup nested over the bottom of a 32 oz. Nalgene or 40 oz. Kleen Kanteen bottle, with the lid in the bottom of the pouch.
Posted by Dave Markowitz at 3:52 PM No comments:

Like a lot of hams and preppers, I own a Baofeng HT. Last week on Facebook, Baofeng Tech announced the APRS-K2 digital interface cable for their radios. Note that while BF advertises it as an APRS cable, in reality it's not limited to that. Other owners have reported that it works with DroidPSK, for example.

At $18.79 on Amazon Prime I had to order one to give it whirl. I have a 2012 Google Nexus 7 tablet that I can use for Android apps, but I'm primarily an iPhone/iPad user. So, after I got the cable I grabbed the aprs.fi app from iTunes and loaded it on my iPad Mini 2.

The BF APRS-K2 cable is like the KF5INZ Easy Digi interface for iPads, in that it relies on VOX to key the rig to transmit. I programmed UV-5RA with the 144.39 MHz APRS frequency, enabled VOX, and connected everything. Aprs.fi had no problems keying the rig with VOX sensitivity set to 2.

Unfortunately I don't seem to be within range of an I-Gate, so although the setup was beaconing, there was no way to port it to the aprs.fi website, other than the app's web connection.

I intend to try the cable with other modes and apps, for example PSKer on the iPad and Fldigi on the Nexus. I'm thinking it might work with the speaker/mic port on my later 2013 MacBook Pro, as well.

Finally, the APRS-K2 is not just useful for Baofeng owners. Since Baofeng radios use the same cables as Kenwood, HTs, the APRS-K2 cable can be used with those as well.
Posted by Dave Markowitz at 9:18 AM No comments:

I wound up not getting that old Nishiki, but I did get something. See post here. Unfortunately, it looks like that the seller of the old bike is trying to stiff me, so I had to open a case with eBay.

Grrr.
Posted by Dave Markowitz at 9:01 AM No comments: