Last week before heading upstate for a camping trip and off-grid ham radio work, I picked up a Powerwerx inline DC power analyzer. When operating off battery power, it's good to know how many volts your battery is actually putting out so that you don't drain it too much.

From the Amazon description:

It's in this picture between my Icom 7200 and laptop. 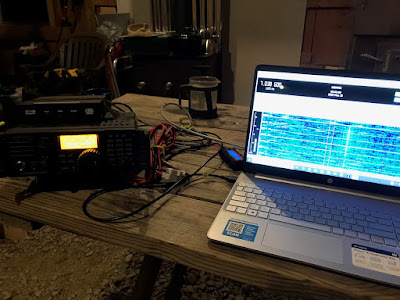 Unless you dedicated battery pack with an integrated meter, this is a worthwhile addition to a portable ham radio kit.

Posted by Dave Markowitz at 6:05 PM No comments:

This weekend I went camping with friends Nick and Ed at Nick's property in Tioga County, PA for some good food, conversation, shooting, and off grid ham radio in the woods. Nick and I hold General class amateur radio licenses, whiled Ed got his Amateur Extra ticket.

Ed got upstate on Friday and so was able to setup early Saturday morning to check in with a CAP net. Unfortunately NVIS propagation on 80M wasn't good and he wasn't able to hear anyone. 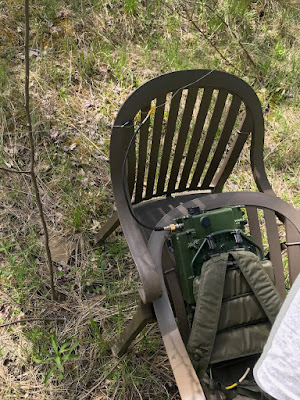 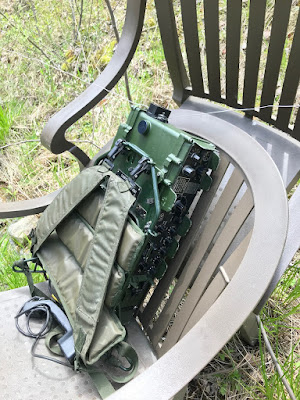 Meanwhile, Nick and I drove up separately on Saturday morning, arriving around 1530.

Saturday night was spent socializing with the locals and sitting around the fire with some bourbon and Baccarat Rothschild cigars.

Sunday morning we got a visitor: Chance the RF-Enabled Coyote Hunting Dog. He belongs to one of the locals and was out hunting with some pack mates when he caught wind of the sausages we were frying for breakfast. He was very friendly but as a pup, didn't want to return to his master when he got the return buzz through his collar, so we spoke to him when he came to retrieve the dog. 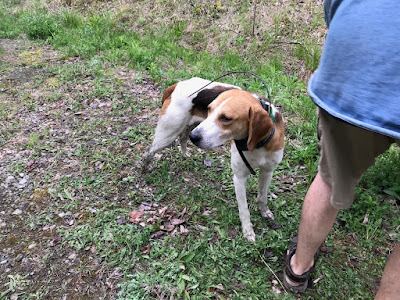 (The antenna is for a GPS-enabled tracker that also allows the owner to transmit a signal to the dog for him to return. The range is several miles.)

On Sunday we hoisted an 80M dipole antenna. But this wasn't an off the shelf antenna, or even a conventional homebrew dipole. Behold the Off-Grid Butterknife Dipole: 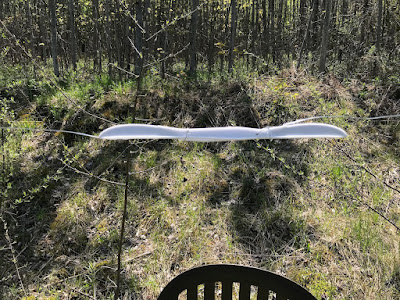 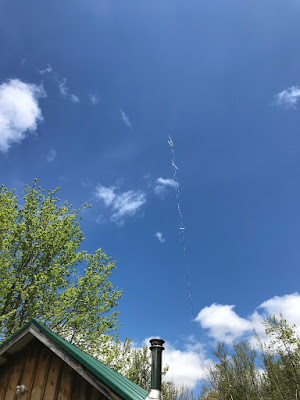 We constructed it from aluminum MIG welding wire with plastic butterknives as the center insulator and spaces for the open wire ladder line we fed it with from the antenna tuner. 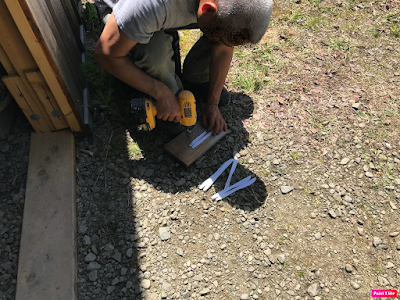 To elevate the antenna we needed to get suspension lines over trees. To get the suspension lines up we attached fishing line running from a Zebco Dock Demon spincasting rod to an arrow and shot it over the trees on both ends. 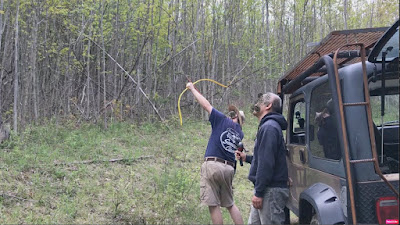 Ed has NanoVNA vector network analyzer so he was able to determine at what the antenna was resonant. Before it was hoisted it was resonant at 3560 KHz on the 80M band, very close to what we wanted. 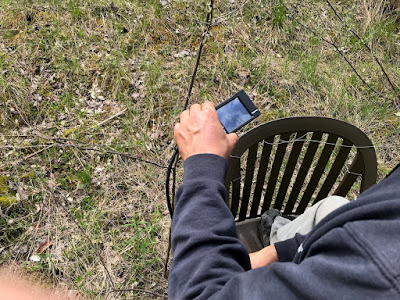 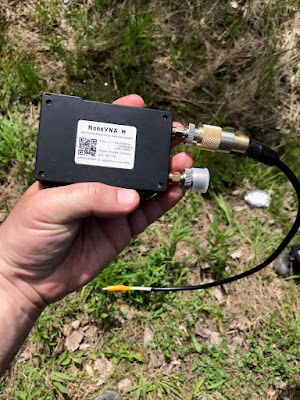 Nick called CQ a few times and although we didn't get any replies we were able to confirm he was getting out to the surrounding several hundred miles via monitoring on WebSDR. 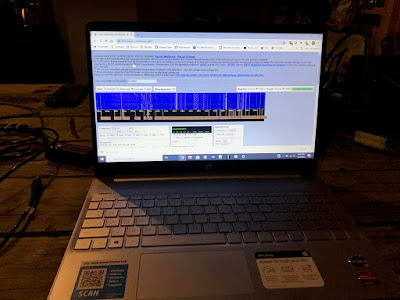 (My laptop got Internet access via the hotspot on my iPhone. Not something to be expected in a grid-down scenario, but we were experimenting.)

We switched over to my rig and got these results on WSPR: 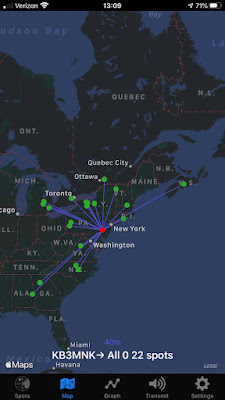 (From the WSPR Watch app on my iPhone.)

Monday morning we hooked up Nick's SDRplay receiver to the antenna. 80M was hopping: 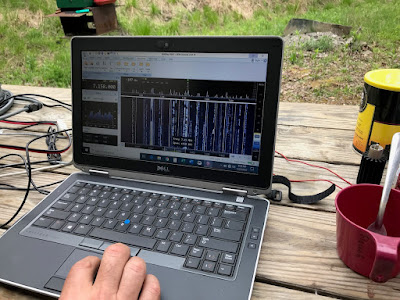 This isn't the first field expedient antenna we've setup at the camp. A couple years ago we did a large, random-length loop made from welding wire that at best was about 5 feet off the ground. We were able to check into a North PA/South NY 160M net. We also had a similar 80M welding wire dipole but it was only about 4 feet off the ground. It still worked great as a receiving antenna.

We left the antenna up when we left but realize that due to the weak nature of the construction it may not be intact the next time we go upstate. However, we also discussed raising more durable antennas and running them to an antenna pass-though in the cabin. E.g., 40M and 80M dipoles, and a 160M loop.

Homebrew wire antennas are pretty cheap, so it's not like doing so will be a major investment.
Posted by Dave Markowitz at 10:11 PM No comments:

I've been getting back into ham radio lately and have a trip upstate planned for Memorial Day weekend. The two friends I am going with are also hams, so one of the activities we like to do in the evening is off-grid communication practice.

My specific interest is in digital mode communications, which requires either a mobile device or a computer to connect to the radio and run various applications. For field ops in the past I've used an iPad and an MSI Wind netbook. I traded in the iPad a year or two ago and the netbook is ancient at this point (plus has a small 10" screen) so I wanted something better.

My normal computer is an Apple MacBook Pro. However, I am not enthused about bringing a $3,000 laptop into the field, plus it seems like a lot of ham apps are better supported on Windows or Linux.


As expected, the hardware feels a lot cheaper than my MacBook Pro. The Mac's case is machined from billets of aluminum. The HP's case is plastic. The keyboard is mushy but usable. The screen is nowhere near that of the MacBook Pro. Overall, the HP is much lighter than the MBP, which is nice.

Battery life seems good. It was partially charged when I brought it home. I plugged it in while setting everything up but then rant it down to around 10% over the course of several hours with web browsing, YouTube, and email. I repeated that on Saturday and probably got a good 7 hours before it went into battery saver mode.

The huge trackpad on the current MacBook Pros really spoils you and it is missed on the HP.

The HP's space bar is annoying. Pressing it towards the right end doesn't do anything. I tend to press the space bar with my right hand so this is a PITA and hinders typing.

Of course, one of the things I had to do was get Windows updated. Compared with Apple's macOS updates, Windows Updates remains a major PITA with multiple reboots required. Overall, it takes a lot more time.

It has been quite awhile since I used a Windows PC for desktop computing although I ocassionally have to login to a Windows server at work so the UI isn't totally unfamiliar.

Anyway, after cleaning up some of the factory-installed bloatware I loaded a number of utilites to make life easier:


And these ham radio apps:


The two Apple applications I'll miss most when using the HP are Messages and Facetime, neither of which are supported on Windows.

Incidentally, Microcenter limited the number of people in the store at a time, you had to wear a mask, and before going inside you had your hands sprayed with sanitized by an employee. Also, they are not taking cash, only credit or debit cards.
Posted by Dave Markowitz at 7:20 PM No comments:

Testing a New Laptop for Ham Radio and WSPR

I picked up a cheap HP laptop at Microcenter on Friday to run ham radio apps on in the field. I'd rather not take my $3,000 MacBook Pro camping, plus it's a fact that a lot of ham radio apps are better supported in Windows. Should something bad happen, it'll be a lot easier to swallow with a $400 laptop.

Anyway, today I was configuring the HP to work with my Icom 7200 using Fldigi, JS8Call, and WSJT-X, and tried out transmitting using the latter in WSPR mode. The antenna was my Hawaii EARCH 40-6M end-fed, strung approximately horizontally out to my back fence. This is far from optimal.

I transmitted on WSPR at 50W a few times and checked propagation using WSPR Watch on my iPhone. Not bad. 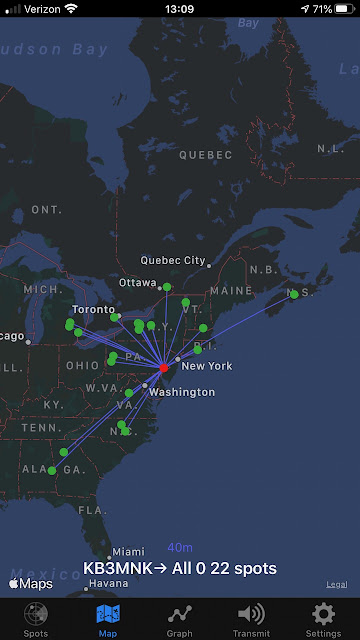 Along with a couple friends I'm heaing up to Tioga Country next weekend. We're all hams and off-grid operations are on the list of activities. One thing I want to try is a random-length loop antenna using welding wire, connected to my antenna tuner using an LDG 4:1 balun. My friend did this a couple years ago and it worked great, allowing him to check in on a north PA/south NY 160M net.
Posted by Dave Markowitz at 7:08 PM No comments:

This afternoon I got to meet a new neighbor and try out a piece of equipment I bought a couple years ago.

My daughter was at the neighbor's playing outside with their daughter. She called and asked if I knew how to jump start a car, because her friend's older brother's car wouldn't start. It's been a long time since I've had to jump a car, but heck, I'm Gen-X and we know these things.

I went down the block to meet them. His car was an older Toyota RAV4 and when asked, he didn't know how old the battery was. It had died without the lights or accessories being left on, so I told him it's time for a new battery but we would try to start it.

Back in 2018 I bought a NOCO Boost Plus GB40 1000 Amp jump starter pack on sale from Amazon. Since then I have kept it in the back of my truck, taking it inside a few times a year to top off the charge. This was the first time I've had to use it.

I connected up the unit and let it charge the dead battery for about 30 seconds then had him start the car. It fired right up, whereupon I disconnected the jump pack and told him to keep the car running for about 20 minutes.

The jump pack worked like a champ and I'm glad to have it. The only thing I didn't care for is that it doesn't come with a decent storage case, so I bought one of these separately.

As far as I'm concerned everyone should keep a jump pack in their vehicle. They are a lot more convenient than jumper cables, not to mention you don't need another vehicle. The lithium battery powered units don't take up much space and retain their charge for months.

This is where I get to make fun of Millenials: The guy who's car I jumped is obviously one, in his 20s, and asked me how long his battery would be good for after I charged it. He didn't know that as long as the engine is running there's a part called an "alternator" that charges the battery.

I'll give the kid a break, because he was wearing a volunteer firefight shirt, which means he's no wimp.

However, with a lot of kids growing up in fatherless households not learning how to work on cars, coupled with the complexity of modern cars that discourages a self-repair work, a lot of Millenials and Zoomers never learn how cars function. To them, it's just an appliance.

Driver's education courses really should include a basic education on how cars work and emergency procedures like how to jump start one and change a tire.
Posted by Dave Markowitz at 2:07 PM No comments: