A couple weeks ago I came home from REI with a shopping bag full of old bicycle inner tubes. The bike department's manager gave them to me for free when I told him I'd like some to make ranger bands (heavy duty rubber bands). And recently, I read on the Hill People Gear website that their preferred fire starter in the field is a 1.5" square of inner tube ignited with a lighter.

Tonight, my 12 year old daughter and I were hanging out when the idea to give the Hill brothers' method a try. So we rounded up a Bic lighter and a piece of inner tube about 1.5 to 2" square, and went out to our back patio where we have a fire pit.

I had the kiddo try it out. After a few seconds of exposure to the Bic's flame the piece of rubber ignited and burned with a hot flame for several minutes. We had no problems starting a fire with this and some small twigs.

I'm going to add a few ranger bands to my fire kit now. When cut as bands the pieces of rubber are multipurpose. They weigh next to nothing and being made from rubber are waterproof.

Scraps from an old bike inner tube may not be a bushcrafty fire starter, but they are a good addition to your emergency fire kit.

New Version of the Harbor Freight 3-In-1 Power Pack

A couple years ago I posted about the Cen-Tech (Harbor Freight) 3-in-1 power pack for portable power. The one I have has served me well on camping trips to power radios and charge cell phones.

The old model looks like it's been discontinued and replaced with an improved version. Improvements include replacing the incandescent work light with an LED, two 12V ports instead of one, and adds a 2.1A USB port for charging cell phones, etc. I'm not going to rush out and replace my old model, but if you're looking for an additional or new portable power source, this looks like a good one.

Posted by Dave Markowitz at 11:02 AM No comments:

Over on Arfcom we find this example of out-of-the-box thinking:

The OP, "EXPY37," took the tritium vial from a bivy marker sold on eBay and installed it in a hole drilled in the front sight of his pistol. This gives him the equivalent of Trijicon night sight for about $9 plus his time. In contrast, a Trijicon front night sight will run you over $60 from Brownells.

Unfortunately, the tritium bivy markers are not legal to sell in the US, but can be procured from overseas vendors on eBay.
Posted by Dave Markowitz at 9:46 AM No comments:

More on Cycling as a Fitness Prep

In my last post I mentioned how I've gotten back into cycling to improve my fitness. I noticed improved stamina after only one week. It's continued to get better as time goes on.

One improvement I made to my 1999 Trek 820 mountain bike yesterday was to replace the old, knobby off road tires with a set of Bontrager H2 semi-slicks, which are better suited to the kind of riding that I'm doing now. I.e., pavement and packed gravel. 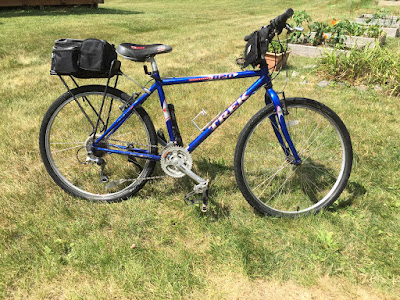 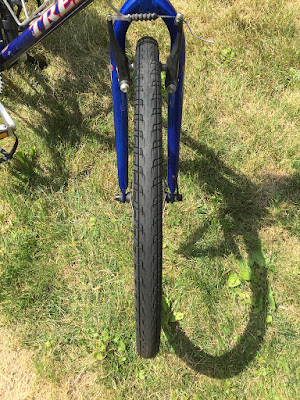 Bicycle tires with an aggressive tread pattern are better for off road use on dirt, grass, loose gravel, or similar surfaces. In contrast, smooth tires offer better traction with less rolling resistance on pavement or hard packed gravel, even when it's wet.

This morning I took the bike for a short ride with the new tires. I did 6.13 miles* along Forbidden Drive in the Valley Green section of Philadelphia's Fairmount Park. These have noticeably less rolling resistance than the knobbies, so much so that I found myself riding one or two gears higher and improved my average speed by a couple MPH, compared with previous rides on the same trail. The improved rolling speed in my case is due not only to the smooth tread but also that these are 1.5" wide, vs. the 1.95" width of my old tires.

I'm also able to run these at higher pressure, between 60 to 90 PSI, vs. 65 PSI max for the old rubber. Since a lot of my riding is on gravel I have them inflated at about 65 to 70 PSI, to provide a little cushioning. Were I to take a long ride on pavement I'd pump them up to 90 PSI.

If you have an old mountain bike laying around or pick one up cheap from a yard sale or Craigslist, you can greatly improve its rideability on hard surfaces merely by swapping out the old tubes and tires for something like the Bontragers. If you envision mixed use, there are a variety of hybrid tires available with a smooth center flanked by more aggressive knobbies that will bite when you take it off road. If you're setting up a bike as a bugout vehicle, then such hybrid tires make a lot of sense.

Another option (and one I'm still considering) is getting a second set of wheels. Most mountain bikes from good manufacturers made in the past 25 years have quick-detach wheels. So, you could have a bike setup for dirt use, and another setup for road and packed gravel riding.

* I wanted to do at least 8 miles today but it was humid and hot as balls. That just sucks the energy right out of you.
Posted by Dave Markowitz at 7:07 PM No comments: