Johns Hopkins put out this heat map dashboard tracking the global outbreak. It's worth a look.

LINK.
Posted by Dave Markowitz at 8:19 AM No comments:

Today I finished building my first AR-15 that isn't chambered for 5.56x45mm. It was time for something different.

While I find the 6.5 Grendel to be very interesting, I didn't want to get into a new caliber at this time, so this one is in 7.62x39. I've maintained a good stash of that caliber since before I got into ARs, starting when I bought a Chinese SKS in 1988.

I used the following parts:

The enhanced firing pin is to improve reliability with foreign ammo with hard primers, while the bolt from BRA is supposedly higher quality. One thing 7.62x39 ARs have the reputation for is breaking bolts. I'm hoping to avoid that but in case it happens, I'll have a spare ready to go.

First impressions of the AR-STONER kit were good, except for the poor staking of the carrier key to the bolt carrier, so I restaked the screws.

Here's the assembled carbine on my messy workbench: 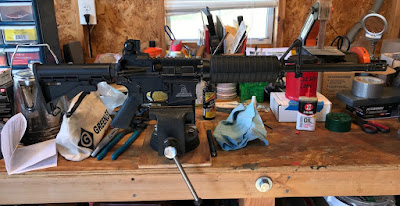 And a close up of the receiver. It's my first AR with a graphic on it: 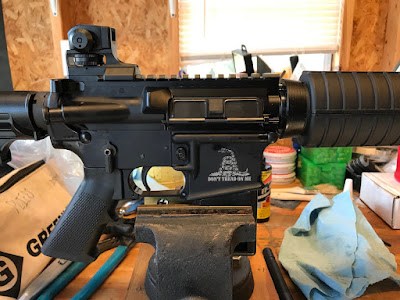 I would have finished it last weekend but managed to shoot a detent spring into the unknown. To complete the rifle I had to wait for an order containing spare detents and springs to arrive from Brownells.

I really hope that eventually Pennsylvania will legalize semiauto rifles for big game hunting. We got semiautos legalized for small game and varmints so hopefully after another year or two the PA Game Commission will realize that it hasn't caused the sky to fall and they'll let us use them for deer. This would make a fine rifle for the ranges encountered in most of PA.

I should be able to put a few rounds through it tomorrow, after which I'll post a follow up report.
Posted by Dave Markowitz at 7:42 PM No comments:


Posted by Dave Markowitz at 7:13 PM No comments: