New Bike on the Way, and a Ride

Since getting back into cycling a few months ago, I've been kicking myself for putting my old Nishiki road bike out by the curb last year. Although my Trek 820 mountain bike with 1.5" wide slicks is good for the local multi-use paths, even Forbidden Drive, a road bike would allow me to ride further and faster. So, I started looking around on Craigslist and eBay for older road bikes with steel frames.

Lo and behold, after a couple weeks of looking, this popped up on eBay: 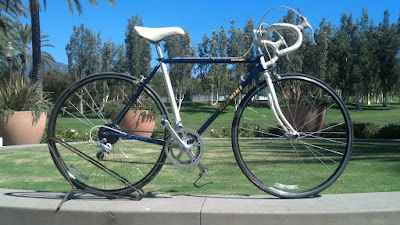 (Picture from the eBay auction.)

It's a mid-80s (probably an '86) Nishiki Olympic with the same frame size and color scheme of my HS graduation present. The Mavic wheelset isn't original, however. After a few minutes hemming and hawing, I bought it.

The 1986 Nishiki Olympic was a 4130 chrome-moly steel framed bike with Araya aluminum wheels, Diacompe brakes, Shimano derailleurs, downtube shifters, and a Sugino VP crankset. Assuming the Mavics on this bike weigh about the same as the originals, it'll come in at about 23 pounds. It should be a fast bike. While riding my old one with a friend who's Trek 520 tourer was fitted with a cycle computer, he clocked us going about 50 MPH on one extended downhill run.

Unfortunately, I'm still waiting for it. I got a message from the seller who found that one of the crank arms was stripped, where the pedal is attached. He discovered this when he began to prep it for shipping. He offered to either knock $25 off the price, or replace it with an original part. I opted for the latter, so I'm hoping it'll ship early next week.

After I get it I plan to rewrap the handlebars, replace the toe clips (one is broken), and of course verify that the derailleurs and brakes work properly.

In the meantime, I picked up a couple items to help me maintain my family's bikes. First, a copy of Zinn and the Art of Road Bike Maintenance. In conjunction with YouTube videos, this should help me learn how to work on them. The second item was a Bikehand Pro Mechanic Bicycle Repair Rack Stand.

I tried out the repair stand for the first time this morning, before I went on a ride. I used it to hold the Trek while I cleaned the chain. It worked well. The stand feels fairly robust and folds up, so that it doesn't take up too much space in my shed.

After cleaning and lubing the chain, I went on my longest ride this year, 12.23 miles, at an average speed of 10.9 MPH and a max speed of 16.1 MPH. Considering I'm riding a mountain bike with aerodynamics slightly better than a brick, I'm happy.
Posted by Dave Markowitz at 6:01 PM No comments: