This is a very good video on fire starting with flint and steel, including the use of a flintlock, from Jas. Townsend's & Son's YouTube channel:


Aside from a flint and steel, they demonstrate how you can do it with a flintlock gun.
Posted by Dave Markowitz at 7:43 PM No comments:

My First Fire with Flint and Steel

I bought this steel years ago at Dixon's Muzzleloading Shop but today was the first time I made fire with it. It was made from an old file.

I cheated a bit and used char cloth bought from an eBay vendor, but now I'm ready to make my own. The char cloth is in the Altoids tin underneath the steel, while the flint shard is laying on some unraveled jute twine from Lowe's. 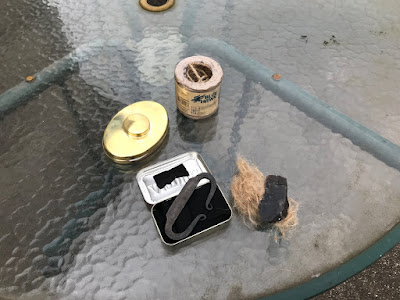 I held the char cloth on top of the flint and struck it a few times with the flint. The ember took hold quickly and I quickly moved it to the bird's nest. After a little gently blowing it exploded into flame, and I hurriedly dropped it into my fire pit. 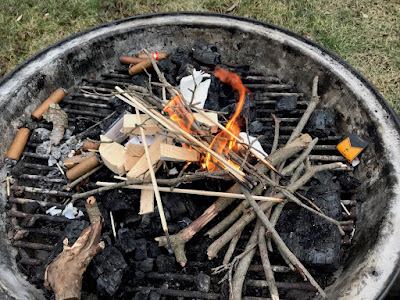 You can see where I dispose of my cigar butts and the long matches I use to light my gas grill. ;)

Now I need to make up some of my own char cloth and find some punky wood to char.
Posted by Dave Markowitz at 1:38 PM No comments:

One rifle I've been shooting lately is my Cabela's Hawken, made in Italy by Investarms. At some point I'd like to take it hunting, which IMNSHO requires a sling. Being a more modern design than, say, my long rifle, I didn't mind mounting modern quick detach swivels.

I found this set by GroveTec at MidwayUSA which fit. I paired it with this Hunter carry strap. Installing the rear swivel required drilling a hole in the stock. The front swivel clamps around the lower ramrod pipe. Before installing it, I Loc-Tited the screw securing the pipe since I noticed it was loose already. I also Loc-Tited the Chicago screw holding the strap to the rear swivel. In my experience, thread locker prevents a lot of problems. I even put some on the inside of the part of the front swivel where it clamps over the ramrod pipe. 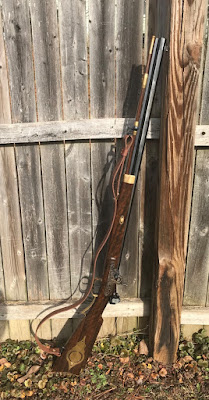 The other addition I made was to replace the Williams fiber optic front sight with a Lyman 37ML white bead from October Country. The dovetail for the front sight is .360" instead of 3/8" (.375"), which is more common in the US. The Williams sight never fit the dovetail that well and wasn't as secure as I'd like.

The Lyman front sight wasn't as good a fit as I wanted, either. I wound up dimpling the bottom of the dovetail recess to raise some metal and shimming it with a small piece of 600 grit wet/dry sandpaper. After the sight was in I staked the dovetail as well. 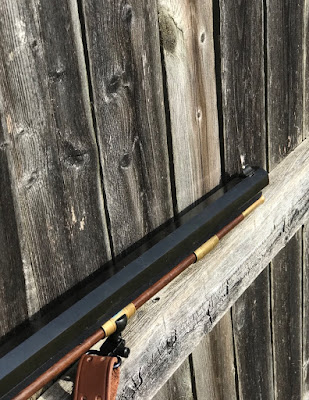 The new sight is a little shorter than the Williams it replaced, so I'll have to rezero the rifle. No biggie.
Posted by Dave Markowitz at 1:49 PM No comments:

Earlier this week, I ordered a Universal Sling from October Country, who caters to black powder shooters. I wanted a sling for my Cimarron 1873 Sporting Rifle that would be more secure than the Leatherman sling I used when I hunted with the rifle last month. (The Leatherman sling is extremely well made but the butt cuff doesn't fit the 1873 snugly and the only way to tighten it is with a cord or rubber band. I'll reserve it for my flintlock.)

OC's sling can be ordered for left or right handed shooters with the difference being which side of the butt stock the lacing is on. As a southpaw, I ordered a lefty sling.

It's primarily intended for muzzleloaders but as you can see below, it fits lever actions just fine. 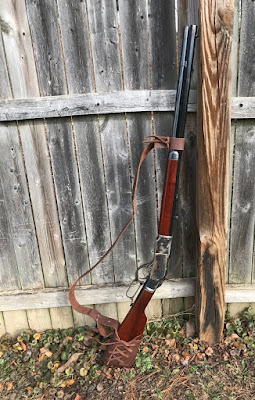 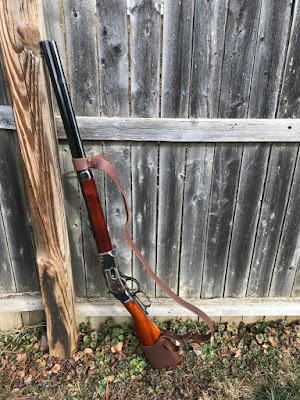 It wraps around the barrel as shown below. There are two holes pre-punched in the strap so you can adjust it. I moved the lacing to tighten it up on my rifle. 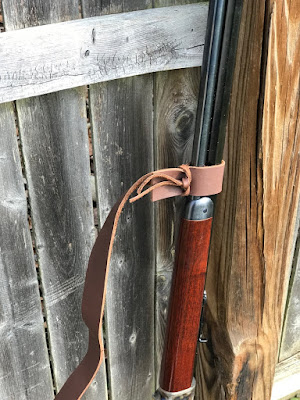 The butt cuff has a slot for the strap in lieu of a swivel. Again, there are two pre-punched holes in the strap down below, allowing you some length adjustment without making modifications. 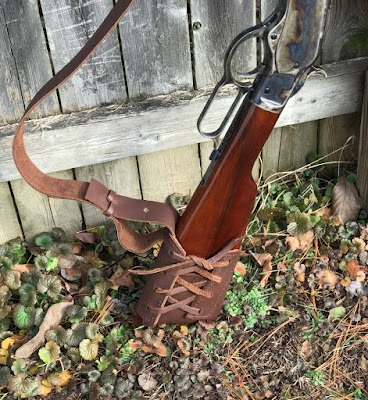 They also offer a two-tone version but I prefer the looks of the all-brown one.

I'm very impressed with the quality. All parts are made from good, thick leather, including the laces. This will make the rifle very nice to carry afield. For $28 and change it's a great deal. I'm tempted to order one for my 1860 Henry because the rear sling swivel popped off it again. On the Henry, I'd use the lacing to attach it to the front sling loop so that it doesn't interfere with the magazine follower.

Aside from the sling, I also ordered a couple French amber flints to try in my long rifle, a primitive forged turn screw to keep in my shooting pouch, and a Lyman 37ML front sight to put on my Cabela's Hawken.

I was also very pleased with October Country's service. A few minutes after I ordered I got a phone call from them asking if I'd changed my address. Apparently, there's another Dave Markowitz who had ordered from them. (I explained that was the evil one. ;) ) My ordered was placed Wednesday and it arrived here via USPS 2-day Priority Mail on Friday.
Posted by Dave Markowitz at 12:04 PM No comments:

The Twelve Apostles of Musketry

In the pre-flintlock era, before the invention of paper cartridges, it became common for musketeers to carry pre-measured powder charges in wooden bottles hanging from a bandoleer. They have come to be known as the "12 apostles," after the Apostles of Jesus. (In my quick research, the term may actually be more modern and not in use in the 17th Century. Regardless, it's in use today.)

Regardless, many modern muzzleloading shooters like to pre-measure their powder charges before heading afield or to the shooting range. There are numerous "quick loaders" available from the usual black powder shooting suppliers, but I found a cheaper alternative: 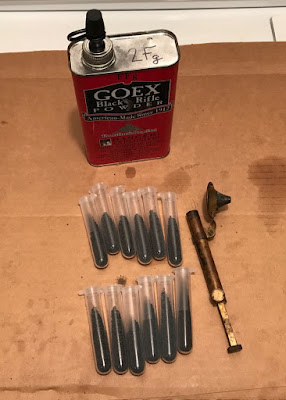 The modern apostles in the picture are 10ml centrifuge sample tubes with snap caps. Each has 70 grains of Goex FFg black powder in them, which occupies about 5.5ml. So, there is plenty of space in them for hunting loads in my rifles, which will be under 100 grains. I bought a bag of 50 of the tubes from Amazon for $10.39 on Prime. 15ml tubes should handle hunting loads for almost any muzzleloader.
Posted by Dave Markowitz at 12:15 PM No comments:

I shipped the rifle on 12/21/18 via UPS Ground insured, from Plymouth Meeting, PA to Taylor Machine in Puyallup, WA for gunsmithing work.

On 1/3/19 John Taylor called to inform that all he received was an empty box with some bubble wrap in it. UPS confirmed delivery of the package.

I do not suspect Mr. Taylor. He has an excellent reputation.

Full details of the rifle:

The rifle is an antique manufactured in 1898 per the factory letter that I got from the Buffalo Bill Center of the Wild West.

Any help in recovery will be appreciated.

Pictures of the stolen rifle (click for full sized): 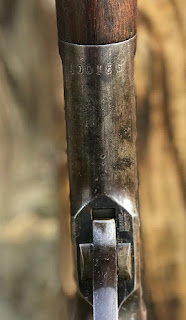 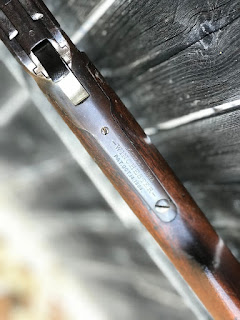 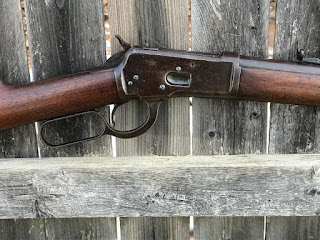 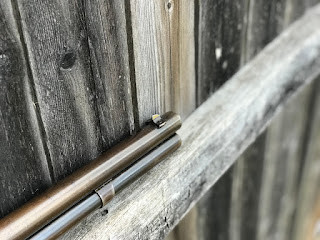 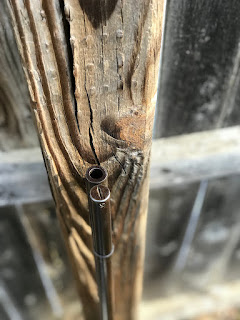 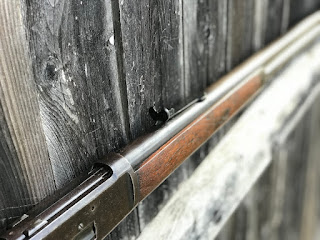 Posted by Dave Markowitz at 5:50 PM No comments:

Today I took advantage of unusually warm weather for January 1st and got the Cabela's Hawken out to the range and got it zeroed with its new sights.

Grouping with the 60 grain load was 3 to 4" from the bench. IOW, not very good. So, I increased the charge to 70 grains and the rifle started grouping nicely. My last three shot group is below. It's the one hole in the center. 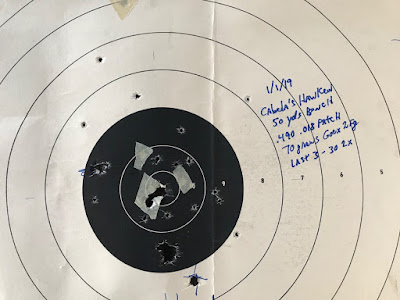 That's 2 in the X-ring and one just outside it in the 10. I can certainly live with that. (The target is full of .22 holes from taking my daughter to the range.)

I still want to experiment with different charges, patch thicknesses, and ball size.
Posted by Dave Markowitz at 6:29 PM No comments: