While checking out foreign MREs on eBay, I ran across the vendor "magnetic1" selling dehydrated beef bibim bap entrees, which are supposed to be Korean-issue. Since I'm always interested in stuff to eat while camping, and I love Korean food, I ordered a 3-pack to try.

Here's the front and back of the package along with the included spoon. 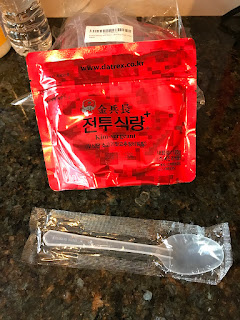 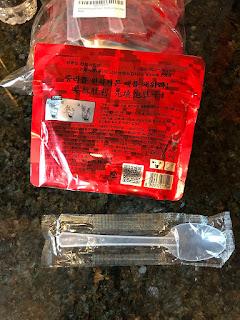 Upon opening, you can see that it's mostly rice with some vegetables. The little brown nuggets are pieces of dehydrated beef. Also shown are the packet of sesame oil and gojang (Korean BBQ) sauce that were inside. 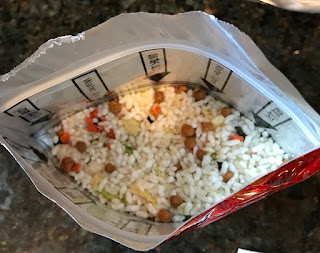 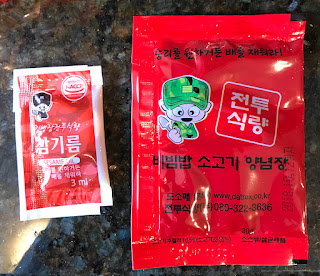 To cook it, you add hot water to the black line inside the bag, seal it, and let it sit for 10 minutes. Or, you can use cold water but you'll need to wait twice as long.

And here's what it looks like after rehydrating and mixing in the oil and sauce packets. 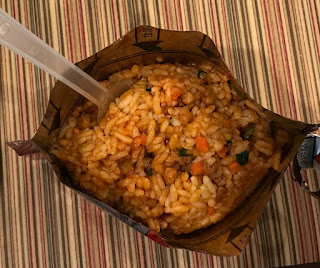 I liked it, it was damn tasty. I used all of the gojang sauce and while it was spicy, it wasn't mouth-burning. That said, I eat Korean food fairly often and eat it full strength, so YMMV. Compared with a couple different Mountain House meals that I've tried, this isn't nearly as salty.

For me, this entree would be enough for lunch but not dinner.

I have two more left that I'm going to save for the field.

Posted by Dave Markowitz at 6:33 PM No comments: