After work tonight I took a ~6 mile ride, which reinforced why it's prudent to wear bright clothing, have reflectors, and lights on your bike.

My ride was on the Schuykill River Trail between Miquon and Shawmont and by the time I got there it was dusk. There was some group run going on so that trail was crowded. A lot of runners were wearing dark clothing and as it got near 7:00 PM they got increasingly hard to see. Those wearing a safety yellow/green shirt were a lot more visible.

Likewise, only about half the other cyclists had lights and many of them didn't have any kind of reflectors.

Something the younger folks need to be aware of is that while you may be able to see just fine around dusk, those of us over 40 often start losing our night vision. (I noticed mine starting to go when I was 35.)

When I got back into cycling this summer I picked up these lights. They are cheap and at least in dry weather, work well. I put a set on my daughter's bike and with the rear set to alternately light one of the three LEDs, I was able to see her from over 200 yards away.

I also encourage the use of reflectors. Yeah, they're uncool. They are less uncool than getting hit by a car or another cyclist because they couldn't see you. Incidentally, I tested the supposedly-reflective sidewall lettering on my Bontrager H2 tires after getting home and was not impressed.

Finally, brightly colored clothes help make you more visible. I wore a bright orange Champion Powertrain T-shirt and I also have one in "reflector green." These shirts are lightweight, wick away moisture, and dry quickly. I have a few others in more subdued colors that I wear in the woods or in colder weather as a base layer, so they are multi-purpose.
Posted by Dave Markowitz at 8:10 PM No comments:

Added a Mirror to the Bike

One of the things I've noticed riding on the local bike paths is how easily a faster cyclist can come up from behind without being heard. It would also be nice to check on following riders in a group ride, so, I decided that adding a rear view mirror would be a good idea. The one I chose is a Mirrycle MTB Bar End Mountain Bike Mirror. Amazon also lists a two-mirror set if you want one for both sides. 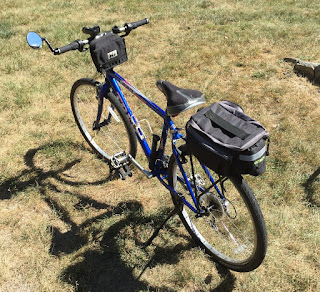 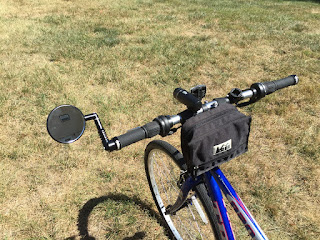 The mirror mounts via a split post much like older handlebar stems. It requires you to remove the end plug or cut a hole in the grip. I had conveniently lost the plug from the left end of my handlebar when I crashed earlier this summer, so that was already take care of for me. Doh.

The unit is mostly plastic so I'm hoping it'll hold up. As long as I don't clip it on something or crash on the left side it should be OK.
Posted by Dave Markowitz at 1:25 PM No comments:

Last week I noticed the Bushcraft Outfitters got some more of their silnylon MEST (Multipurpose Emergency Survival Tarp) ponchos in stock. I ordered one of Friday and it came yesterday.

Along with the poncho I ordered a tube of McNett seam sealer to prevent leaks on the hood seams. I sealed the seams last night. The sealant was a little tacky, so per the instructions on the packaging I dusted them with some talcum powder, which can be seen in the pictures below.

I took some pictures of the MEST poncho with the Chinese-made USGI-style poncho that I've been carrying strapped to the bottom of my HPG Tarahumara day pack. 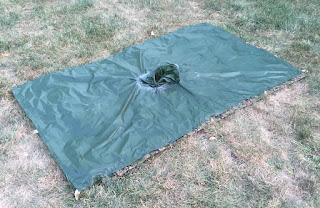 Notice that the MEST has nylon webbing loops sewn on, rather than grommets. This allows you to make field repairs with a needle and thread.

The old poncho came with a stuff sack but I generally rolled it up. I took pics of it both ways to show how much smaller the MEST is when stowed. 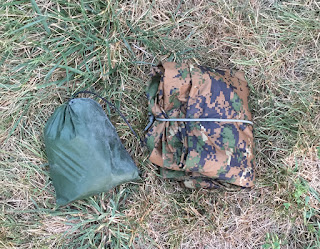 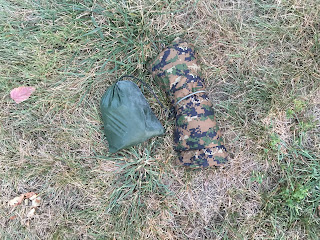 Aside from being much smaller, the MEST is maybe half the weight of the rubberized nylon GI-style poncho. The MEST could easily be carried in a cargo pocket. Combined with some utility cord or 550 cord, and some lightweight tent stakes, it'll make for a light, compact shelter.

Now all I need is some rain to test it out.
Posted by Dave Markowitz at 7:41 PM No comments:

Back on the Bike

August in SE PA was so hot and unpleasant that I haven't been on my bike for a month, until today. Before leaving I checked over the bike and inflated the Bontrager H2s up to 80 PSI. I'd been riding with them at about 65 PSI and wanted to try out higher pressure for less rolling resistance. I also played around with my seat adjustment because the last time I rode I had some discomfort down below.

The difference in how the bike rides with higher tire pressure was immediately noticeable. Rolling resistance was much less at the cost of a harsher ride on Forbidden Drive's packed gravel surface.

My ride was cut short after only a little more than a mile, by two trees that had fallen across the trail. I didn't want to try climbing over them because there's a good chance that there would be poison ivy mixed in. 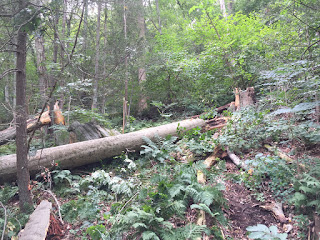 It looked like the half rotted out tree on the right feel and took out the other tree on the way down. 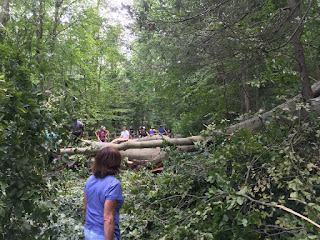 I wasn't ready to go home yet so after getting back to my truck I drove over to the Spring Mill train station and hopped onto the Schuykill River trail, where I had a pleasant ride. The section I was on is paved so compared with the packed gravel in Valley Green I was flying. The extra 15 PSI of course helped quite a bit and I seem to have got my seat adjusted correctly, too.
Posted by Dave Markowitz at 3:06 PM No comments:

Dinner on the Mountain

Yesterday Amanda and I went up to the Conrad Weiser State Forest for a few hours, and had dinner on the mountain. (It's not much of a mountain, but hey, we're in southeast Pennsylvania.)

We used my Esbit CS985HA cookset to boil the water for our noodle soup and heat up some Vienna sausages. 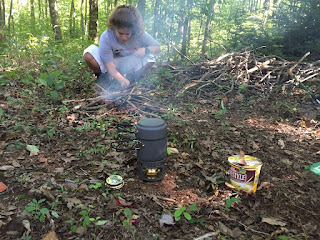 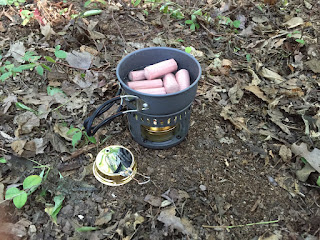 It's a versatile cookset. The 33.3 oz./985ml main pot has volume graduations stamped into it, which can be read from the inside. The 15.9 oz./470ml smaller pot can be used as a lid, or as shown above, as a saucepan. Both have folding rubber-covered folding stainless steel handles.

The pot stand/windscreen has four rubber feet on the bottom which would keep it slightly elevated off a table.

The set allows you to cook with either the included brass, Trangia-style alcohol burner or using Esbit hexamine fuel tablets. A small platform to put inside the pot stand when using the tablets is included. The pots, tablet platform, and pot stand are made from hard anodized aluminum.

You could burn sticks and twigs in the pot stand but it's not really designed for that. E.g., the bottom has a large opening so you'd want to sit it on a rock or cleared dirt.

For use with the alcohol burner, a simmer cap/snuffer is included. There isn't enough room in the pot stand to use it as a simmer cap but it works well to extinguish the stove. You want to use it instead of the screw-on cap for the stove. If you use the cap to put out the stove you'll damage its O-ring, which will let the stove leak if you carry it fueled and ready to go.

All the parts nest together and can be stored in an included mesh bag. I line the pot with a plastic bag before nesting everyting else inside to keep it clean. Also, if I use hexamine tablets the outside of the pot will get a coated wth soot. The plastic bag allows me to keep that off the rest of my gear.

The total weight of the Esbit cookset is 15 oz., not including fuel. I keep the brass burner filled with denatured alcohol, three or four Esbit tablets, a bandana, and a small box of matches packed in the kit.

Our campsite is not near a water source so all of our water had to be packed in. Amanda used an Osprey water bladder in her pack, while I used three one-quart canteens. One is a 1945-vintage aluminum USGI canteen that I found several years ago at a gun show.  The other two were Nalgene Oasis canteens, which have the same exterior dimensions as US military issue canteens, but which are made of a better plastic, weigh a little less, and don't impart any taste to the water.

Posted by Dave Markowitz at 11:23 AM No comments: