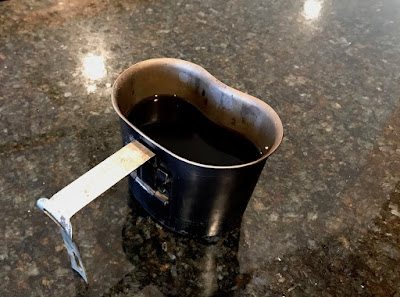 It is a USGI canteen cup made by Ingersoll Products sometime in the early 1970s. I got in around 1985 after I joined Civil Air Patrol. The outside is black from heating many meals in campfires.

American servicemen have been using canteen cups since the introduction of the M-1910 over a century ago. It's one of the best pieces of gear ever. The main thing it really needs is some kind of a lid. I have an older Heavy Cover brand stainless steel lid that I modified a bit to make it lighter, but for a couple decades I just relied on a piece of aluminum foil.

Newer USGI canteen cups have folding butterfly-style wire handles. I prefer the older L-style cups like this one. It's one feature of the Keith Titanium set that I would change. (OTH, the Keith sets come with a nice lid for the cup, so there's that.)

The horizontal slot in the handle is to allow you to put a fork from the M-1926 fork into it as an extension for when you're cooking on a fire. The vertical slot is to allow it to be slipped over the handle of the mess kit (AKA "meat can") so the whole ensemble can be dunked in boiling water for field sterilization.

Survival Resources has a nice article on useful mods to this style cup, including how to make a lid, adding D-rings to the handle so you can use a stick for an extension, and adding a bail. Check it out. (Incidentally, I recently ordered a few things from Survival Resources including a haversack. I plan to do a post and/or video on that as soon as I can get to it. No problems at all with my order and I got it quickly.)
Posted by Dave Markowitz at 11:26 AM No comments: