Cycling as a Prep

In my last post on this blog I mentioned my recent purchase of a hitch-mount bike rack, and over on Blog O'Stuff, I have several posts about my renewed interest in cycling. My current bike is a late-90s vintage Trek 820 mountain bike on which I've recently added a few accessories. 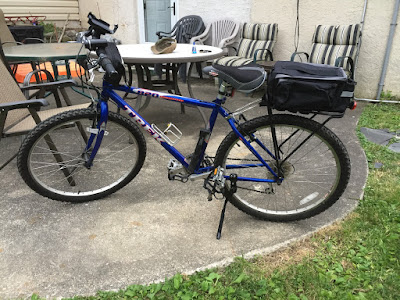 Aside from replacing the original hand grips, which were deteriorating, I added the rack, trunk, kickstand, front and rear LED lights, and a RAM mount to hold my Garmin 62 GPS.  For a prepper there are several things attractive about an older steel mountain bike like my Trek:

Mountain bikes in general tend to be more rugged than road bikes, especially the wheels. They are a lot more versatile, allowing you to ride on pavement, dirt, or gravel. Everything else being equal, mountain bike tires are more resistant to flats than high pressure road bike tires.

For preppers, bicycles offer low cost transportation that doesn't require fuel and can help you get and stay fit. Cycling on a bike that fits you is great, low impact cardio exercise. The "rails to trails" movement is converting many old rail beds to multi-purpose trails, all across the US. These trail networks not only provide a place to ride without having to deal with distracted drivers, they may also create less-used paths for cyclists and pedestrians to bugout in an emergency. Getting a bike now and exploring them is a useful way to combine recon with recreation.
Posted by Dave Markowitz at 9:01 PM No comments:

Last summer I bought a Curt Class III receiver hitch for my 2007 Nissan Xterra. With the help of a friend with a garage and air tools, installation was easy. The primary reason for the hitch wasn't for towing anything. Rather, I wanted to be able to expand the carrying capacity of the truck by using a hitch mount cargo carrier.

The cargo carrier I got was this one from Harbor Freight. If you catch it during one of their sales and use a 20% coupon, you can probably snag it for about $70 - $80. I found it to be pretty well designed but at some point I might replace the screws holding it together with stainless steel screws. Assembly was pretty straightforward with a screwdriver and nutdriver.

As a compact/mid-sized SUV, the Xterra has enough room for a long weekend camping for two people. When I bring both kids, though, I need to leave the back seats up and lose about half my cargo capacity. Before I got the external cargo carrier I used a bag strapped to my roof rack. This is OK for duffle bags but is a major pain to access and kills gas mileage. In contrast, the hitch mount carrier is easy to mount and has enough space to hold a cooler, Rubbermaid Action Packer box full of stuff, a Coleman stove, and a roll up aluminum table from REI.

The major downside of the hitch mount carriers is that if you leave them unattended whatever is on them is vulnerable to theft. Also, you don't want to overload them because doing so will change the balance of your vehicle, affecting its handling.

The secondary reason for the hitch was for a bike rack. I finally ordered one this week. My girls have been after me to get one so I can take them to local trails for cycling. Now that they are beyond the little kid stage they'll be able to bike for long enough to make such trips worthwhile. I used to be into cycling but it's been years since I did more than a couple laps around my subdivision. It's a good, low impact way to get some exercise.
Posted by Dave Markowitz at 10:25 AM No comments: