If you have many electronics or flashlights around the house and have been using alkaline batteries in them, you no doubt have experienced leaks. If you catch the leak soon enough you can generally clean out the device and restore it to service, but if the leaks goes undiscovered for too long there's a good chance your device will get ruined.

In my experience, Energizer alkaline are somewhat better than Duracell when it comes to leaking. However, other folks report the opposite. You pays your money and you makes your choice.

This is one reason I keep a spare can of CRC Quick Dry Electrical Contact Cleaner around the house.

However, you can prevent having to deal with the leaks by switching to a different battery chemistry, namely either NiMH rechargeable or lithium cells. In the past week I've changed out the batteries in several important flashlights, headlamps, and my Garmin 62stc GPS with Energizer lithium AA and AAA cells. I've bought some from Amazon and some from Battery Junction.

These devices don't see heavy use but when I need them, I need them. The lithium cells have a long shelf life -- advertised as up to 20 years, and don't leak. They also handle low temperatures better, which makes them a good choice for flashlights or headlamps that are kept in vehicles.

I've also decided to replace the Ziploc bags I've been using to carry my spare batteries with these plastic containers. They should protect the batteries better against impacts and short circuits.

From what I've read Panasonic Eneloops seem to be the gold standard in rechargeable AAs and AAAs. However, I haven't tried them out yet. I'd appreciate any feedback on them.
Posted by Dave Markowitz at 2:49 PM No comments:

I tried a tin of Bumblebee smoked boneless, skinless trout today for lunch. 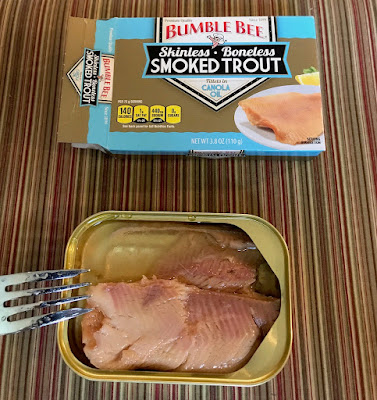 More of these cans will be getting added to my larder. It'll make a good addition to my daypack or for overnighters. It was good right out of the can. I bet this would be really good on the FDF rye bread crisps from Varusteleka, but I like that it can be consumed with no preparation.

I'd picked this up at my local supermarket a few weeks ago. If you can't find it locally it -- along with other brands -- can be bought from Amazon. I'd like to find some packed in olive oil rather than canola but this will do for now.
Posted by Dave Markowitz at 2:33 PM No comments:

A Few Things to Improve My Get Home Bag

Since I took an internal transfer about two years ago, I now work in the 'burbs rather than commuting into center city Philadelphia. My office is about 25 miles away via vehicle but if I ever need to hoof it home, it would probably be longer. I therefore keep a get home bag in my truck.

I'll do a full post sometime, but in the interim thought I'd share a few things I've added recently:

First is a 1"x 10 yard roll of Gorilla tape. I keep a full size roll of duct tape in my truck's tool bag, but this will give more a more portable roll. Duct tape is useful in general for everything from repairs to a bandage cover to a fire starter, and Gorilla tape is the toughest.

Second is a travel sized bottle of Gold Bond Original Strength Body Powder. It weighs next to nothing but can add a great deal of comfort, whether it's for your feet or your dangly bits after you've been in the field for a day or two. As far as I can recall, I don't think I've ever seen some kind of body or foot powder mentioned in a get home bag.

A 25 oz. DZO brand stainless steel camping cup with lid. I keep a 40 oz. Kleen Canteen stainless steel water bottle in the bag but wanted a vessel for cooking in and a second vessel for boiling water. The DZO cup is well made with a nice fitting lid, and the price was reasonable.

An extra pair of socks, specifically these Särmä merino wool hiking socks from Varusteleka. I took advantage of their July 4th free DHL shipping promotion and bought two more pairs along with some other stuff. The socks are stored inside a Ziplock bag in my pack and a pre-loaded with some Gold Bond powder.

The get home bag itself is a Särmä Large Assault Pack from Varusteleka, in olive green. It's Maxpedition knock-off but seems well-made for the price. For something that's going to ride in the back of my truck 99+% of the time it will do fine. Before I decided on the Särmä pack, I used a German Alpine rucksack. The Särmä has much better shoulder straps and is a little larger, which gives me room to add more insulation in colder weather.

For what it's worth, I'm not worried about the pack's tactical appearance drawing unwanted attention. After 18 years of the never-ending Global War on Terror, seeing MOLLE even in urban areas isn't unusual. Heck, I've seen frumpy women in their 60s carrying similar packs in downtown Philly.

I'm going to be adding a USGI-style poncho that I've had to the GHB tomorrow. I decided to seam seal it before doing so, so that it doesn't leak whether I'm wearing it or using it as a shelter. For that I used Silnet Silicone sealant. Most ponchos, especially cheaper ones, will benefit from seam sealing.

Today I made up a quick-deploy ridgeline for use with the poncho or the USGI casualty blanket I keep in the bag. I used about 30 feet of OD 550 cord and three #36 bankline Prussik loops, as demonstrated in this video by Corporal's Corner:


I wound up using twisted bankline from a spool I ordered by mistake. I prefer the braided, which while not quite as strong doesn't fray as easily when you cut it.  The twisted stuff will be fine for this application.

One last thing that I have on order is a bottle Sawyer picaridin-based insect repellent. I'm not generally averse to DEET which IMHO is the gold standard for bug repellent, but picaridin has the advantage of not eating plastic. Like DEET, it repels mosquitoes and ticks, both of which would be a concern in a bugout or bug home scenario (if not during, afterwards if you catch Lyme disease or West Nile virus). I recently bought a bottle of this stuff and tried it out while sitting on my back patio after dark. It worked to keep the skeeters away. Otherwise I would have been eaten alive.

I'm planning to do a video on my get home bag, perhaps an overnighter with it.
Posted by Dave Markowitz at 4:25 PM No comments: