I modified another 5 cases today in my lathe. I loaded those and the 5 I modified yesterday with 4.4 grains of Unique, a CCI LPP, and a .358 160 grain LSWC from Matt's Bullets. I also loaded another 50 in unmodified brass using Sellier & Bellot SPPs.

The round on the left is an unmodifed case. The 2 on the right are modified. 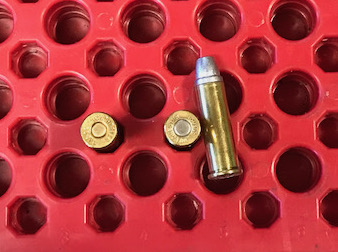 You'll note that there is still plenty of brass around the large primer.

I should be able to try them next weekend.

Posted by Dave Markowitz at 1:52 PM No comments:

Don't Forget to Test Your Generator

Today I wanted to fire up the DuroMax XP4850EH dual-fuel generator I bought in September. I ran it on propane after I bought it, and it started immediately on that try. My intention has been to mainly rely on propane, so I left the host and regulator connected to it and coiled up.

When I pulled it out of storage today and connected a full propane tank, it would turn over but not start. Much cussing ensued.

I tried another battery, in case the one that came with it had drained too much to start the engine. No dice.

I then decided to try it with gasoline. I used a battery-powered transfer pump to put some gas from a jerrycan into the tank.

And guess what, it started right up. I ran it for about 10 minutes. I then turned it off and used the pump to put most of the gas back in the jerrycan. Then I started it again and ran it dry, which took about an hour.

My theory is that there's something wrong with the propane regulator. It might be clogged. I'm going to see if I can blow it out, or get a replacement. I should have covered the regulator with a plastic bag and sealed it, but failed to do so. Learn from my mistake.

I'm just glad that I discovered this before I needed it.

Posted by Dave Markowitz at 6:18 PM No comments:

One of the things I've preached on this blog is that when times are good, you should stock up on items that will be hard to get during a panic. One of those things is a good supply of primers if you're a reloader.

Guess who forgot to stock up on SPPs before the panic hit? Guess what is virtually impossible to find now?

Before the COVID-19/race riots/election year panic set in, I thought I had around 5K SPPs. In reality, I have about half that.

So, a few weeks ago I wondered if it would be possible to convert .38 Special brass to accept LPPs. I did some research online and found that in fact, there used to be factory loaded .38 and .357 ammo which used LPPs.

Since LPPs may contain a bit more priming compound than SPPs, if you do this, reduce any maximum or near-max loads by 10% and work on up.

This page has a chart listing the minimum and maximum dimensions of both primers and primer pockets.

To modify the primer pockets I used a .210" chucking reamer with a stop collar on it to set the depth. The stop collar was made from 1/2" 6061 aluminum rod. It's held in place with an M4 screw I had in one of my miscellaneous parts bins. 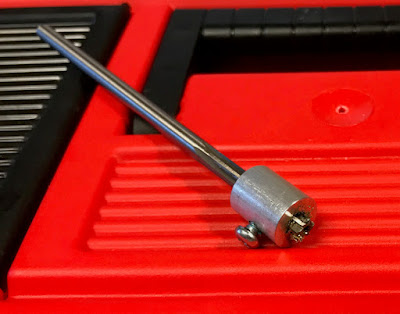 To use it, I chucked deprimed a .38 Special case in the lathe and held the reamer in a drill chuck in the lathe's tailstock. 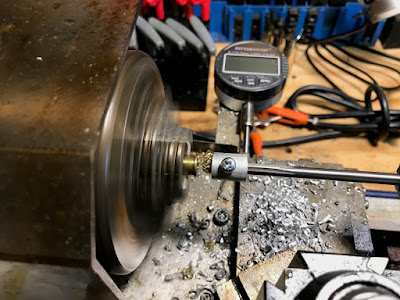 Note that because in a lathe the workpiece rotates, not the cutting tool, I don't need to be concerned about the stop collar being unbalanced due to the set screw sticking out.

I found that because of the small clearances, brass chips built up between the head of the case and the collar. I had to withdraw in several times per case to clear the chips with a brush and pick. It was slow going.

But eventually, I converted five cases to accept large pistol primers. To test, I seated CCI LPPs. They seated easily, maybe a little too easily. It might be better to use a .209" diameter reamer because .210" is the maximum for large primers. 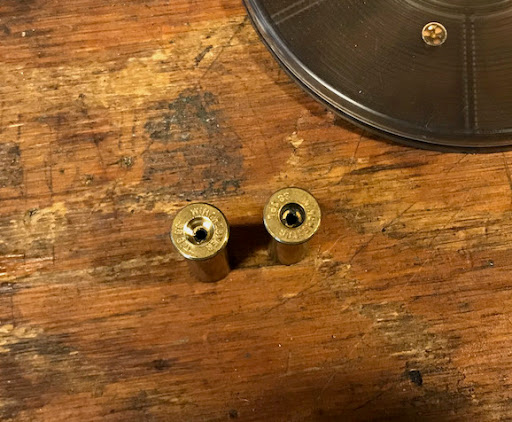 I plan to do another 5 cases tomorrow and then load them will mild charges so I can test them on my next trip to the range.

During the Obama-era panic, some of the primer shortfall was made up by imported primers. I'm hoping that the same will happen this time around.

And you can be damn sure I won't be caught short again.

Posted by Dave Markowitz at 4:42 PM No comments:

Paul Harrell: Top 5 Tips for Training in the Ammo Shortage

Posted by Dave Markowitz at 7:52 AM No comments: