Sparks31 has advice on choosing your first police scanner. Read it here.
Posted by Dave Markowitz at 8:52 AM No comments:

I've been following Sparks 31's blog for awhile now, and bought his book Communications for 3%ers and Survivalists. He's decided to make the full text of that book and his other tome, The Modern Survivalist available as one PDF, for free.

It's worth a gander.
Posted by Dave Markowitz at 12:27 PM No comments:

One type of antenna I've wanted to try for HF has been a magnetic loop or magloop, for short. For portable operations they have a few advantages: small size, light weight, and fast setup and takedown. The disadvantages of small, non-resonant magloops include lack of efficiency and very narrow bandwidth (although the latter can be advantageous in certain circumstances).

In particular, one that gets almost universally excellent reviews is the AlexLoop Walkham by PY1AHD. It's a QRP antenna limited to 10W PEP but for use with my Yaesu FT-817ND that's not an issue. (The FT-817ND's max output is 5W.)

I was down in Delaware for work today at a site about mile from the New Castle, DE Ham Radio Outlet, who carries the AlexLoop. One came home with me. After work I set it up out back on my patio.

I had it sitting on the same camera tripod I used with my Arrow 2M yagi antenna. 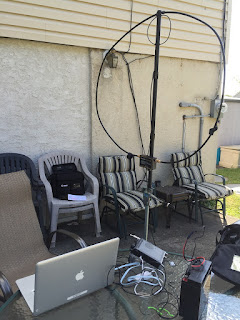 Close up of the control box: 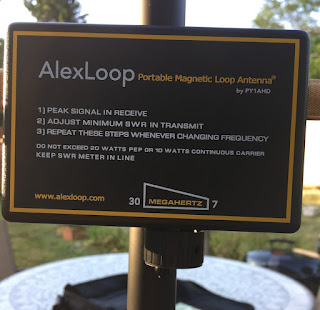 You use the knob on the bottom to tune it. The way I did so was to tune for maximum noise. Because it is very narrow banded, if you change frequency even a few kHz, you must retune.

Although it says right there on the box that you should have an SWR meter inline, dummy me forgot to get a BNC-to-UHF adapter so that I could do so. Instead, I configured the FT-817ND to display rough SWR readings on transmit, which allowed me to fine tune the antenna.

So how's it work? I'd say it's promising. On 20M PSK31, here are the signals I received in a couple hours that Fldigi reported to pskreporter.info. I saw more than these on the waterfall, however. 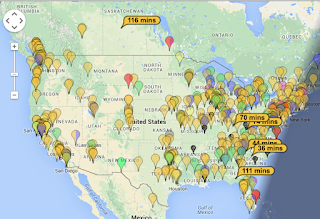 And here's what I received. 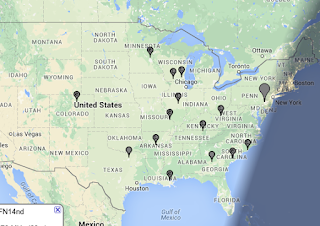 Not shown were the several European stations I saw on the waterfall, including Spain, Italy, Serbia, Slovakia, Bulgaria, and Poland.

I completed two QSOs, one with a ham in MO about 815 miles away, and another with an operator in Italy, 4348 miles away. For whatever reason, he didn't show up as receiving me on pskreporter.info.

I also tried 40M for a few minutes but the band was dead.

The AlexLoop should be a good choice for portable operation, especially when camping. It collapses down into a small, light package, and came with a nice carrying bag. Setup is easy and quick, and unlike my portable vertical, it doesn't require any counterpoises to be laid out and gathered up. It wasn't cheap, but it's well made and should last a long time.

If you're looking for a portable antenna for QRP HF, the AlexLoop Walkham is worthy of consideration.
Posted by Dave Markowitz at 9:00 PM No comments: