The padlock to my generator shed was frozen solid. I wanted to unlock it in case I need it for an incoming storm. The lock is in close proximity to plastic so I didn't want to use a torch. So, I took two disposable, stick-on toe warmers and sandwiched the lock between them, then waited awhile. (The rubber band was for a little extra holding power.) 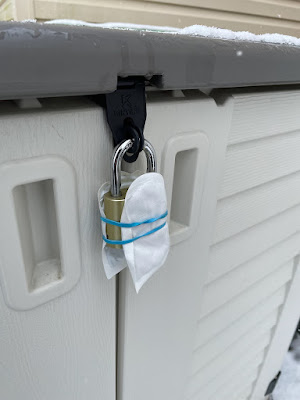 I ran out to the hardware store and when I got back about an hour later, it opened right up.

It was in the upper 20s when I did this. If it was colder you could wrap some plastic around it to hold in the heat and block the wind, but I'd leave the bottom open to allow in some oxygen for the heaters.

Posted by Dave Markowitz at 5:52 PM No comments:

Don't let anyone tell you that revolvers are 100% foolproof. If you shoot them long enough you'll run into functional issues and sometimes, parts breakage.

This afternoon I was shooting with a friend and this happened to his revolver: 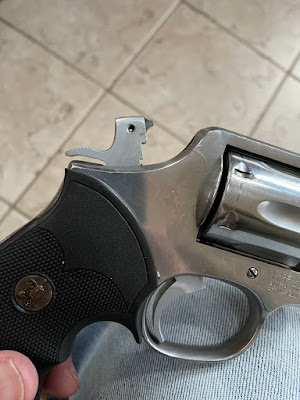 That's a 1980s-vintage Smith & Wesson Model 64 K-Frame chambered for .38 Special, with a broken hammer nose. The gun is down hard until my friend replaces it. The fix shouldn't be difficult but it will require tearing down the gun pretty far.

This is the first time I've personally experience a broken S&W revolver firing pin. However, my brother owned a Rossi .357 in the 1990s and it experienced a similar failure.

If you have a small battery of guns, it's a good idea to have a spare of the one you use the most, so that you can rearm yourself if it goes down. Likewise, for small, easily lost parts, or parts known for breakage, keep spares on hand.

Posted by Dave Markowitz at 6:41 PM No comments:

Posted by Dave Markowitz at 11:51 AM No comments: