This afternoon I took a few minutes, field stripped the Kel-Tec RDB, and took some pictures. The rifle's design is different enough so that I think you'll find them of interest. Clickenzee to embiggenate. 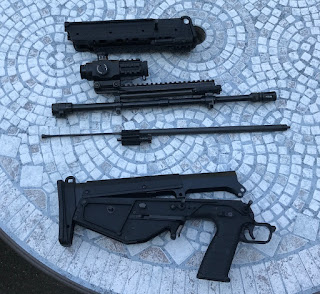 Slightly closer view of the barrel and bolt groups: 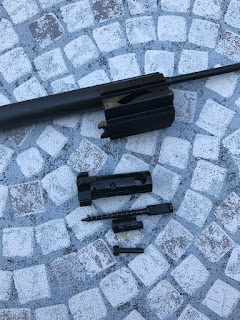 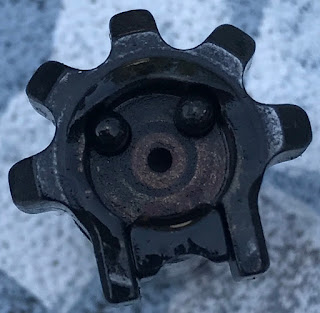 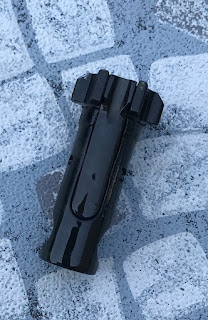 Piston head. It's a little hard to see but there is a weld blob on the top of the piston. Some earlier rifles left the factory without the weld, which leads to malfunctions. 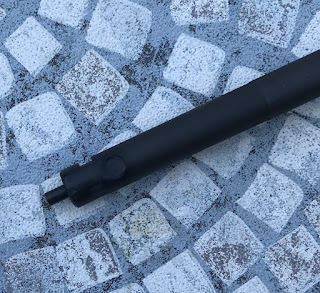 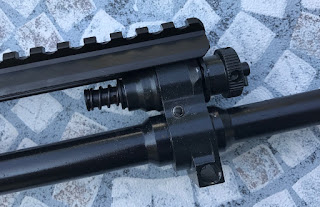 Bottom of the handguard, showing the molded-in M-1913 rail. I have a Rogers Rail Light mounted.

Disassembly to this stage requires you to push out three takedown pins, plus one pin in the bolt carrier group. If you take down the BCG be careful. The firing pin is spring loaded and if you fail to contain it, it will launch itself several feet. (Yeah, it happened to me the first time I stripped the BCG.)
Posted by Dave Markowitz at 3:48 PM No comments:

Yesterday I decided to move a scope I already owned over to the Kel-Tec RDB I bought Friday night. My Colt AR15 6721 has been relegated to backup status and was wearing an IOR Valdada 3x25mm CQB scope.

The IOR scope is built with Schott glass from Germany, has very clear optics, and a nice reticle. The 3x magnification works well from close-up to my club's longest range, 200 yards. It's also built like a brick shithouse, so I am not going to worry about BUIS. 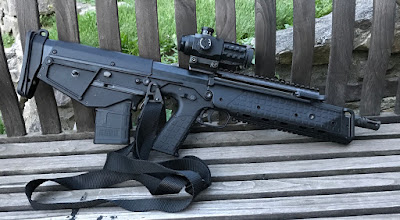 Posted by Dave Markowitz at 10:35 AM No comments:

Picked Up a Kel-Tec RDB Rifle

Kel-Tec gives the OAL as 27.3" with its 17.3" barrel. The weight unloaded is 6.7 lbs. The barrel is 1:7" twist. There's a long, T-marked M-1913 Picatinny rail on top but it comes without any sights. I am debating what kind of optic to mount, but it will probably be something along the lines of a 1-4x variable, not just a red dot.


The RDB is a new design, although the bolt itself is very Stoner-ish and it takes AR15 magazines. It came with one 20-round MagPul P-Mag, an owner's manual, and a sling.

There are numerous sling mounting points for the hook-style attachments. In the pic above I had it mounted as a 2-point sling but I later switched it to a single-point using the swivel located in front of the middle takedown pin.

It's a long-stroke, gas piston design. The gas is adjustable to account for variations in ammo or the amount of crud in the gun. However, reviews I've seen state that very little fouling gets into the action. Empties eject out the bottom, through a port behind the magazine well.

The action is very simple and breaks down with only something to drive out the takedown pins. (They may loosen up over time.)

As a southpaw, the best part to me is that it's totally ambidextrous except for the HK MP5-ish charging handle. It can be reversed without tools. All I had to do was field strip the rifle and then put it in the other way when I reassembled. My initial impression of the rifle is that the ergonomics are outstanding.

Because of the long linkage between the trigger and the rest of the firing mechanism, most bullpups have lackluster trigger pulls. Not so in the case of the RDP. It's actually pretty good with some takeup but it's only around 5 pounds.

Between the adjustable gas system, the lack of fouling in the action, and having the ejection port on the bottom of the rifle so gas gets vented downward, it's supposed to be an awesome suppressor host.

In typical Kel-Tec fashion, they are scarce as hen's teeth, though. Kel-Tec announced it a few years ago but they just started shipping in 2016. They are still really hard to find in shops although there are a bunch on Gunbroker.

MAC posted a nice, in-depth review of a pre-production sample on YouTube in 2015:


I should be able to take it out in the next week or two and will post a follow up after I am able to shoot it.
Posted by Dave Markowitz at 10:07 AM No comments:

BBC: Why One Man Left Silicon Valley and Setup a Survival Camp

BBC News published this video, which I think is worth watching. It's only a few minutes long. (I couldn't figure out a way to embed it.) H/T to Tamara on Facebook.

The BBC reporter's reaction to the AR15 was a bit stereotypical, but amusing.

As someone who works in information technology and who is seeing the push to automate more and more, I don't think he's completely off-base.

Heck if I know the solution, though.
Posted by Dave Markowitz at 4:42 PM No comments:

My 13 year old daughter wants to come hunting with me this year and needed a suitable shotgun. Today, we went to the local Dick's Sporting Goods and picked up this 20 gauge Mossberg 500 Super Bantam for ~$325 + PA's 6% sales tax.

I actually had her try out the Mossberg 510 youth model in .410 bore but she's already outgrown it. That's good because the 20 gauge will throw significantly more shot and 20 gauge slugs are adequate for deer.

Both the stock and forearm are synthetic. The stock is currently setup with a 12" length of pull but it included a spacer to increase it to 13". If she needs a longer LOP it will accept adult-sized stocks. The stock has a good, thick recoil pad on it.

The 22" barrel is threaded for choke tubes. It came with the modified tube in place. Using the included wrench, I swapped that out for improved cylinder. It also comes with a full choke tube. The barrel is topped with a white bead up front and a brass middle bead.

At 5.25 lbs. unloaded it won't be hard for her to carry afield. Heck, that weighs less than her school bag on most days. The stock has a place to attach a sling swivel but the gun didn't come with a stud for the front. So, I found one on eBay and it should hopefully be here by the end of the week. It will thread into an existing hole on the barrel mounting screw. I also ordered an inexpensive sling with swivels and an Outers cleaning kit.

The magazine came plugged so that the only way to load it was singly through the ejection port. The manual states that once your new shooter learns gun safety you can shorten the plug (a dowel) to 9", to allow up to two shells in the magazine. I did so, since my kid is not new to shooting. (Frankly, if they aren't safe to handle a manually operated gun with 3 shells in it, they aren't safe to handle a single shot.)

The unplugged magazine capacity is six 2-3/4" shells. I have some Federal 20 gauge #3 buckshot with which I'll pattern it. It would make a nice home defense shotgun.

Aside from hunting, this will be a good shotgun to introduce my daughter to trap and sporting clays.

Of note, Mossberg has a similar gun in their economy-oriented Maverick line. However, spending more money on the 500 was worth it to us because the Maverick uses a right-handed cross-bolt safety instead of the Mossberg's ambidextrous tang safety. I'm a lefty and my kid is left-eye dominant, and hence shoots portside.

Posted by Dave Markowitz at 4:31 PM No comments: