This is really clever, IMO:

Posted by Dave Markowitz at 9:18 AM No comments:

Thanks to Fo Time on Facebook, I ran across this e-book on antenna construction, Practical Antenna Design 140-150 MHz VHF Transceivers, by Elipidio Latorilla. Included are a couple variations on the familiar VHF ground plane, but the details look like these would be easier to construct than most such designs.

This book is worth adding to your library.
Posted by Dave Markowitz at 9:02 AM No comments:

Over on gundigest.com, Dave Morelli has an article in which he advocates gun training in bad weather.

I see nothing in the article with which I disagree. The author isn't advocating going out in crappy weather to learn the fundamentals. He's telling you to get out there in sub-optimal conditions to learn what your gun does -- and what you do -- when it's windy, rainy, or cold.

Based on my own experience in shooting practical rifle matches at my club, operating your gun in extreme weather conditions stresses the shooter in ways not experienced when it's 75 and sunny. If it's humid, lenses (both eye glasses and scope lenses when you accidentally breathe on them) get fogged. If it's snowing ice can form on your gun while you're waiting to shoot, rendering it slippery. When it's hot, your sweat gets in your eyes and on the gun.

Or step in a 10" deep puddle of ice water while your waterproof boots are only 8" high, then go on to finish the stage.

Get the basics down in good weather. Then go see what happens when it's shitty out.

It was about 12 degrees out when this pic of me was taken back in January. 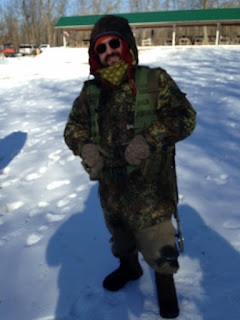 Under stress you will default to the level of your training. If you train easy, you will fail get life gets hard.
Posted by Dave Markowitz at 8:45 AM No comments:

Sparks has recently posted  about Internet service interruptions, some of which are the result of intentional action. See this post, too (and my readers may recognize the picture of the FT-817).

Today, I ran across this story on Ars Technica, reporting a fiber optic cut near San Francisco which was the twelfth such interruption in that area this year.

A sufficiently motivated party could cut several such fiber optic lines, or take out a colo facility in which many such lines pass through, and thereby cut off comms for a large number of people for a significant period. Given our current dependence on the Internet and telecommunications, this could be disastrous for those affected.

BTW, from the viewpoint of someone who's worked for an ISP for nearly 15 years, if somebody takes out a colo facility, Shit Just Got Real.

The Internet was designed to route around breaks but as it has grown in the past 15 years, the level of overall redundancy has dropped in many areas. Too many parts of the infrastructure are vulnerable to intentional disruption. With Islamic terrorism happening more frequently on US soil, I am concerned that at some point they'll go for infrastructure.

This is why I highly recommend getting at least a General Class amateur radio license. The General Class license gives you operating privileges on most of the frequencies allocated to ham radio operators in the US, and isn't much more difficult to get than the entry level Technician license, now that there is no Morse Code requirement.

There's a lot of overlap in the Tech and General exams, but you get a lot more privileges on High Frequency (HF) with the General ticket. HF is what's needed for long distance communications, or certain kinds of regional comms (see, NVIS).

The ARRL maintains a web page with info on getting licensed, including training and finding an exam, here.

You need to get licensed now, before you need comms, because you need to know how to operate your radio, and understand on-the-air procedure. You cannot expect to be able to turn on a ham radio, press a button, and talk to someone like you're using walkie talkies. Just like having an AR-15 doesn't make you a Navy SEAL, having a radio doesn't make you a competent operator. It takes practice, and the only way to get it is to get on the air.

If you're not licensed, don't expect to be able to get on the air with a fake call sign. Not only will licensed hams not talk to you, they may very well track you down and sick the FCC on you. The penalties for unauthorized transmissions can include $10,000 fines.

It's not a bad idea to have unlicensed communications options available, as well. FRS and GMRS* are good for local comms, as is CB Radio. See Dialtone's posts on the "Jungle Telegraph," here and here.


* I know, GMRS requires a license. However, I'll bet that 90% or more of bubble pack FRS/GMRS radios are operated without one.

Over on Arfcom one of the members started a thread about the upcoming Leonardo DiCaprio film, The Revenant, coming out this December. Here's the trailer:


The movie is based on the story of real-life mountain man Hugh Glass, who was mauled by a grizzly bear, was left for dead without a gun or even a knife, and then crawled 200 miles to the nearest white outpost, making Glass' tale one of the most amazing and enduring survival stories ever.

Glass' saga was also told in the novel Lord Grizzly, which I read years ago. It was a best seller when released in 1954, and is a classic. I decided it would be worth rereading, so I bought a new copy to read on Kindle.
Posted by Dave Markowitz at 8:44 AM 1 comment:

This morning, I've been working on getting my new Uniden BC396XT programmed to search frequencies in my country, the surrounding counties, and a few nationwide radio services like CB, FRS/GMRS, and NOAA weather. To start out with, I am using FreeSCAN, which is very full featured and of course, free.

I've also downloaded the demo of  ProScan, which has a 30 day demo.

Both ProScan and FreeSCAN feature rig control, which given the highly menu-driven UI of the Uniden scanner, is nice to use if you have a PC handy. Unfortunately, both are Windows-only.

Compared with programming an amateur radio, as a scanner n00b this is more complicated, which came as a bit of a surprise. Part of it is the new interface but aside from that, there are a lot of frequencies to monitor and organizing them is a challenge.

Uniden includes an RS-232 serial cable for programming the unit. C'mon guys, it's 2015. How about a USB programming cable? Yes, Uniden sells one, but it's about $50 after shipping. (There are clones out there on Amazon and eBay, but I have no idea if they are any good or not.)

For several years, most computers haven't come with serial ports, so you'll probably need a USB-to-Serial adapter if you want to use the supplied cable. I already have a Keyspan USA-19HS USB-to-Serial adapter, which I've found to be one of the more trouble free such units when working with things like network routers and switches. It works with Windows, Mac, or Linux computers. Amazon has a less expensive TRENDnet alternative.

If you're serious about scanning, then a Premium subscription to Radio Reference is a must. Having the Premium membership allows you to enter your credentials into your programming software and have it download groups of frequencies into your local database, then upload them to the scanner. Given the number of frequencies you'll want to monitor, this is necessary so you don't have to spend days manually entering the info.

Note that to programm the CB, FRS/GMRS, and MURS frequencies, you need to use FreeSCAN's EZGrab function, that lets you copy a table from a web page and paste it into the program. Radio Reference doesn't have these frequencies in their database to download. It would be nice if FreeSCAN could have these as a menu item, similar to what is found in CHIRP, which a lot of us hams use for programming amateur radios.

Another valuable resource is the Easier to Read Manual from Mark's Scanners page. I may buy a hard copy from Scanner Master.
Posted by Dave Markowitz at 11:40 AM No comments:

I've been wanting to get a better picture of radio activity in my locale, and have a way to pick up official transmissions in the event of an emergency, so I bought a Uniden BC396XT Trunk Tracker IV scanner from Amazon. 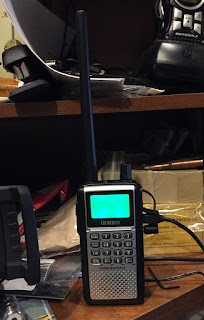 (My Icom 7200 is peeking in from the left, and my Motorola Talkabout FRS/GMRS radios on the top right.)

In order to more easily program it, I downloaded Freescan and upgraded my account at radioreference.com to a 180-day Premium one. A Premium account allows you to configure Freescan to directly download from the Radio Reference database, and then upload it to your scanner.

The user interface of the scanner isn't what I'd call intuitive. However, I was able to program it with Freescan and have managed to pick up transmissions from a local fire/EMS group, police, SEPTA, and a couple hams conversing on the W3EOC UHF repeater. All this was using the stock rubber duck antenna while sitting in my house. An external scanner antenna is on my to-buy list.

Learning how to maximize the value I get from this scanner will take awhile, but I think it'll be a valuable addition to my radio capabilities.

Unless you were under a rock, you know about the following three things:


On Tuesday, this was tweeted by Anonymous:

Unless the network and system admins at UAL and the NYSE are totally incompetent, they have major redundancy in place to prevent shutdowns like this from happening. There's simply too much money at stake to have single points of failure.

Now, was Anonymous responsible? Perhaps it was someone looking to divert attention from the Chinese stock market meltdown. Whatever really happened I doubt that the powers that be would share the truth, for fear of upsetting the apple cart.

My tinfoil hat feels a bit warm. It would be a good time to revisit your emergency preparations.
Posted by Dave Markowitz at 8:28 AM No comments:

How To Make an Off-Center Fed Dipole AKA Windom Antenna

Posted by Dave Markowitz at 1:03 PM No comments: