Inspired by this article by C.E. (Ed) Harris, earlier this month I loaded up a batch of full power .38 Special wadcutters. Wadcutter ammo in .38 Special is usually loaded light for target shooting. However, when loaded to the same power level as .38 service loads, wadcutters are effective on game and for self defense use. Expansion is minimal but they penetrate very well and cut a full-caliber hole the entire way.

The loads I shot today consisted of:

Note that Ed Harris uses 146 grain double end wadcutters cast from a Saeco mold. I chose the button nose design cast from a Lyman 35891 mold because they may offer slightly better accuracy at long range (i.e., over 50 yards). The difference is probably minimal, however. The bevel base does make loading them in the brass a little easier.
Something interesting to note in that reading various forum posts over the years about .38 wadcutter loads, it appears that these bullets virtually always give best accuracy when loaded to full power.
In any event, my Smith & Wesson Model 15-3 likes this load. This 12-shot group was fired today from about 10 yards, shooting double action: 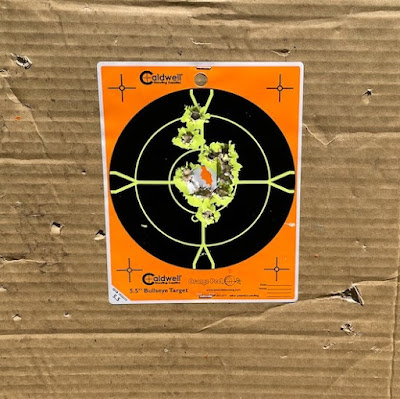 I caused the 2 flyers.
I'm going to load up a bunch more of these rounds.
Posted by Dave Markowitz at 3:25 PM No comments:

Yesterday on my ride I noticed that the derailleur didn't want to shift all the way down onto the largest cog. I probably knocked it out of adjustment when I changed the tires. Today I fixed it.

The Lectric XP is too heavy to put on my regular bike maintenance stand, so I picked up a set of Handlebar Jacks, along with the extensions for a little more lift to protect the brake and shift levers, and especially the display.

Here are the jacks strapped to the handlebars: 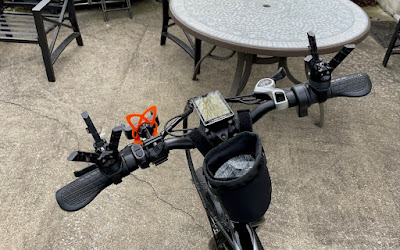 And the bike upside down on them: 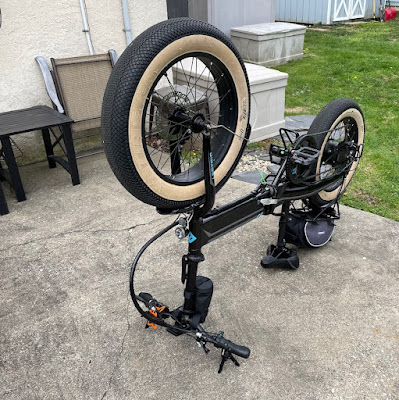 The bike is reasonably steady in this position but you still need to be careful to not knock it over. A bike with wider handlebars would be steadier. 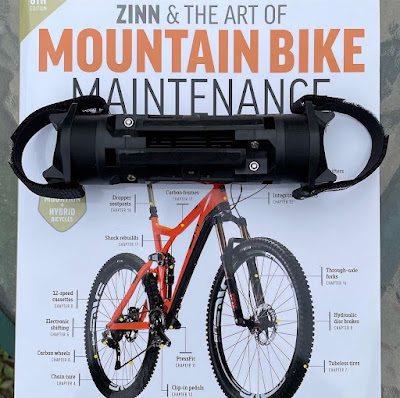 I recommend the Handlebar Jacks to anyone with one of these heavy e-bikes who wants to work on it himself. Doing maintenance with the bike upside down like this isn't as handy as having it on a proper stand but it beats balancing the bike directly on the handlebars. Plus, you can easily take the Handlebar Jacks with you on rides. I keep them in the rack trunk.

I recommend the book for anyone who wants to do at least basic maintenance. There's a version specific to road bikes, which I also have.

Posted by Dave Markowitz at 12:21 PM No comments:

After work this afternoon I took the Lectric XP out on the Cross County and Schuykill River Trails for a ~14 mile ride. Aside from a quick spin around the 'hood after I mounted them, this was my first ride since September. 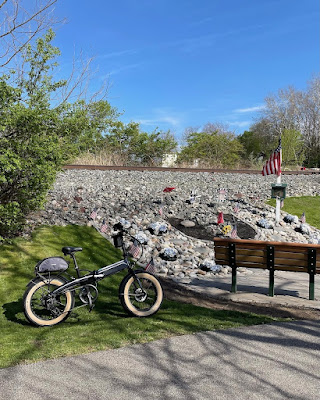 The Vee Speedsters are a major improvement over the factory knobby tires. The bike now rides almost as quietly as my Trek 820 with Serfas Drifter tires.

I must have knocked the derailleur while changing the rear tire as it needs some tweaking. Since my bike maintenance stand can't handle the XP, I picked up a set of Handlebar Jacks which should simplify working on it.

Posted by Dave Markowitz at 5:45 PM No comments:

Garand Thumb posted this up on YouTube the other day. You should watch it.

Id' say the tone is a bit more serious than most of his videos. Current events in Ukraine are obviously an inspiration for the video. The impression I get (as well as some other folks who have more inside scoop) is that this kind knowledge may become valuable here in the US in the not-too-distant future.

Along those lines, I recommend checking out the Integrated Skills Group website, with these articles in particular:

But don't just be a gear queer, read the stuff on skills and mindset.
Posted by Dave Markowitz at 8:42 AM No comments:

One thing we've seen from Ukraine is enemy action taking place on information given up by people on the other side who are sloppy with personal and operational security. The presence of smart phones on the battlefield is a goldmine for intelligence.

Here's a list to get started on not being a PERSEC/OPSEC dumbass:

Posted by Dave Markowitz at 8:08 AM No comments:

New Tires for my E-Bike

Last year I bought a Lectric XP e-bike. After riding it for awhile I came to dislike the knobbie tires that it came with from the factory, since I ride it solely on pavement. They add drag and a lot of road noise. However, because it uses 20 x 4 tires options for replacement are limited.

I'd read a couple of posts online extolling the Vee Tire Company's Speedsters, which have a smoother, inverted tread pattern. However they were out of stock everywhere I looked for quite awhile. I checked their website in early March and saw that they had a special where I was able to get two tires for $160 shipped from Vee in Thailand. They arrived in a timely manner but I didn't install them until today. 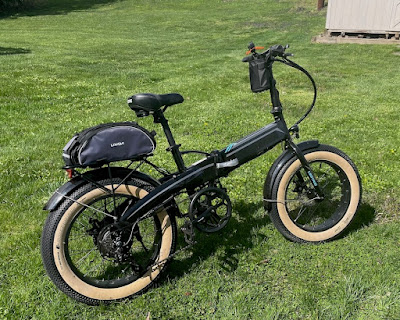 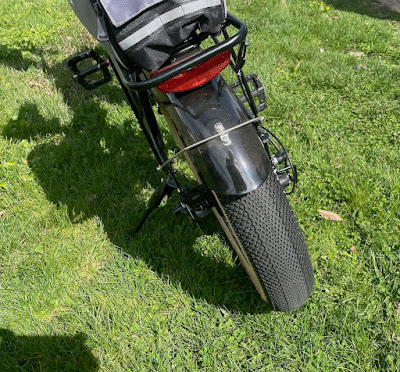 I actually would have preferred blackwalls but all they had at the time were the gumwalls. That said, they give the bike a bit of a retro look.

After getting them installed I took the bike for a quick ride around the block to make sure I had everything reassembled correctly and to get a feel for them.

My initial impressions are very favorable. The bike rides much more smoothly and quietly now. I'm hoping that the reduced rolling resistance improves range a bit, too.

Posted by Dave Markowitz at 5:24 PM No comments:

Over on Bushcraft USA, a member posted the following:

So, I've had this whole .357 magnum revolver idea stuck in my head about long enough now that it's kind of becoming a serious consideration.

I have no interest in concealed carry, this would be strictly a woods bumming gun.

I've owned very few handguns over the years. the two longest running are, a Contender in 7-30 Waters scoped bull barrel for about twenty years. It was fantastically accurate, but awkward to carry and shooting offhand was difficult at best. It was very barrel heavy. I traded it for a milling machine about ten years ago and as much as I enjoyed shooting it I don't miss it. It never really fit my hunting style. For deer I've always been a still hunter in very thick cover.

I have a Ruger Bearcat .22 that it's only redeeming quality is it is light weight. I hate the fixed sights, to me that ruins the whole gun package. Also we don't have grey squirrels or cotton tails around here except in town pretty much. We can't shoot grouse with anything other than a shotgun. So snowshoe hares are the only thing to shoot with a .22.

I seem to think it would be fine for the heavy cover thick brush highly mobile style of deer hunting that I like with shots of 40 yards or less.

Loaded with .38 special it would be enough for the odd coyote or even more rare fox.

Maybe some wadcutter for small game if I wanted or just plinking and fooling around.

And realistically fooling around would probably be its primary job.

I have most of my reloading stuff yet, so handloads are an option if I decided to go back down that rabbit hole again.

To which I replied:

My favorite handgun cartridge is .38 Special. It handles everything I need a pistol to do, with mild recoil, useful power, and excellent accuracy.

In my opinion, the most versatile handgun you can have is a medium frame .357 Magnum double action revolver with a 4" barrel. They a full sized guns but small enough for concealed carry with the right holster.

With the right ammo you can use them for target shooting, hunting game up to deer sized, training new shooters, and self defense.

Reloading .38 Special and .357 Magnum is relatively easy because they are straight walled, rimmed cases. Carbide sizing dies eliminate the need to lubricate cases. They are usable with a wide variety of powders (even black powder, since the .38 was originally designed for it). There is a huge variety of bullets available in cast, swaged, plated, powder coated, and jacketed flavors.

Check out the articles by Ed Harris about the .38 Special (among other things) hosted at https://www.hensleygibbs.com/edharris/backcreekdiary.htm.

And of course, a .357 revolver makes a dandy companion to a lever action in the same caliber. Even full house .357s are mild to shoot in a carbine and firing .38s in a carbine is much like shooting a .22.

Posted by Dave Markowitz at 10:49 AM No comments: