Over the years, I've owned several multitools from Gerber, Leatherman, and Victorinox. However, for my needs I've found that a Swiss Army Knife is far more useful and easier to carry.

For my needs, a SAK is also more useful than a pocket knife that's just a knife. I  use the other tools on a SAK as much or more than the cutting blade.

I've carried several SAKs, starting with a Victorinox Pioneer that I bought around 1981 for $13 at Herter's Cutlery at the King of Prussia Mall. (This was the first knife I bought and I still have it.)

One thing I haven't cared for is how SAKs eventually wear a hole in my pants pocket. I've found a couple solutions to that.

The first is attaching the knife via its keyring to a short lanyard looped around a belt loop. I made the lanyard just long enough to hold the knife vertically in my pocket. The lanyard has a plastic clip that allows me to easily detach and reattach the knife to it. Naturally, this requires the use of both hands but the SAK needs that to open any of the blades or tools anyway.

More recently I discovered the SwissQlip, an add-on pocket clip for most 91mm SAKs. (Check the list of supported SAKs at the link.) It attaches to the knife using the keyring's mounting hole, after you remove the ring.

I installed one on a Victorinox Fieldmaster. Small screws like the SwissQlip's attachment screw often have a tendency to loosen, so I put a drop of blue Loctite on it before screwing it in. 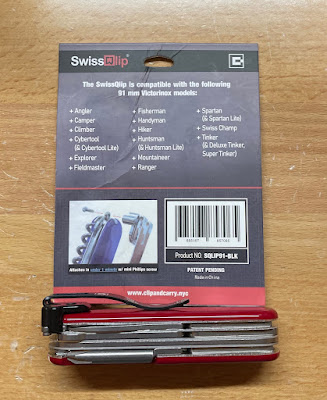 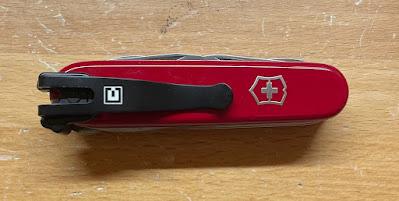 I've been carrying the Fieldmaster fitted with the SwissQlip now for a couple months and it works well, with a couple caveats.

First, it does block easy access to the tweezers. To get the tweezers out you need to use the toothpick to pry it up to the point where you can grab it.

Second, it also blocks access to the package hook unless you use something else like a small screwdriver to pry it open. This I don't care about since I have never used the package hook on any of my SAKs.

I'm willing to put up with these two things because overall the SwissQlip makes the SAK easier to carry. It's held securely to my pocket and has just the right amount of tension to keep it in place while still remaining easy to reinsert into my pocket.

I haven't found that the SwissQlip gets in the way when using the knife.

At $20 it's not exactly cheap but it is well made and functional. It's a worthwhile addition to a SAK.

Posted by Dave Markowitz at 4:38 PM No comments: