My daughter and I hit the range yesterday and brought along "her" Ruger SR22. I put 20 CCI SV rounds through it.  She shot it unsuppressed, so I had her use Remington Golden Bullet high speed brass-plated hollow points.

Golden Bullets don't have a very good reputation for quality but as of a couple years ago Remington seems to have improved them. They run well and give good accuracy in my Remington Nylon 77 and 550-1, so I wanted to see how the Ruger would handle them.

My kid put at least 150 Golden Bullets through the Ruger. We had one failure to go into battery that was resolved by bumping the back of the slide, and one misfire. After trying a second hit, then ejecting the misfire and rotating it 180 degrees, it went off. This isn't unusual with cheap bulk .22 ammo.

I'm happy to see the Ruger function well with the Golden Bullets. They were one of the few types of .22 ammo I was able to lay in a good supply of during the 0bama years.

Posted by Dave Markowitz at 3:42 PM No comments:

I've recently been considering acquiring a second compact .22 autoloading pistol. A few years ago I picked up an Israeli surplus Beretta Model 71 Jaguar, which is a really nice shooter. However, factory magazines are unobtanium and if something breaks, I'm probably SOL.

This Father's Day I was given $100 in Cabela's gift cards, which I used last week towards the purchase of a Ruger SR22. The specific model I got is the 3604, which sports 3.5" threaded barrel.

About 5 or 6 years ago, Ruger introduced the SR22 which is a small DA/SA .22 semiauto pistol styled much like the Walther P22 (which in turn looks like a scaled-down P99). The Ruger has a much better reputation for reliability and durability, according to what I've seen online.

First some stats, then shooting impressions.


From Ruger's North Carolina factory, the pistol shipped with a chamber flag in place, two 10-round magazines, two extra magazine baseplates to replace the pinky rests installed on the mags, a lock, the thread coupler, and a wrench for the coupler. A thread protector was screwed onto the barrel. It came off with moderate force using the wrench.

It also shipped with two interchangeable grip sleeves. Mine was fitted with the one that has a palm swell. I have fairly small hands and it fits me well. My 13 year old daughter also liked how the gun felt.

And of course, it came with an owner's manual, literature about the NRA, and a couple Ruger stickers.

Before shooting the Ruger I field stripped and lubricated it with some FP-10, since it was bone dry.

Field stripping and reassembly is straightforward. Certainly a lot easier than my Mark III 22/45 Lite. To field strip, unload the pistol, drop the hammer using the decocker, and then open the takedown latch in front of the trigger. The slide can then be pulled up and to the rear, off the frame rails, and then slipped forward over the muzzle. Note that the thread coupler has a flange around it that will prevent the slide from slipping forward over the barrel. If the coupler is installed it must be removed prior to field stripping.

The magazines are easy to load. Each has a thumb button to aid depressing the follower.

I haven't shot it for groups yet but did get a couple hundred rounds through it while plinking at a few old hard drives and a self-healing rubber target. The first 95 were CCI Standard Velocity rounds shot through my Form 1 suppressor. I also put a lone CCI CB Long through the can, which as you'd imagine was very quiet. The remainder were Federal Automatch high speeds shot unsuppressed. The gun had no malfunctions.

A primary reason for buying the Ruger was to get a pistol that my 13 year old daughter could comfortably hold and shoot. It excels at that and she's trying to claim it as her own after shooting it this weekend. Even with my silencer she's able to hold it steady and frequently hit our plinking targets. My next step will be to get her shooting at paper. 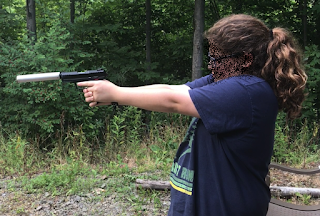 Incidentally, being able to shoot it suppressed is a major advantage when training a new shooter. My can is hearing safe when fired outdoors with standard velocity ammo. Being able to give instruction in a normal conversational voice instead of having to shout to be heard is damn nice. Contact your reps and let's get the Hearing Protection Act passed!

My initial impression, along with my daughter's and that of my friend who shot the SR22 are all extremely favorable. I hope to run a few more different kinds of ammo through it soon, and shoot it on paper to check group size and fine tune the zero (which is pretty much on already).

*Most modern shooters insist that they be referred to as "suppressors." Their inventor, Hiram Maxim, named them "silencers." Under the National Firearms Act, they are "silencers," even if "suppressor" is a more technically accurate term.
Posted by Dave Markowitz at 11:18 AM No comments: