I got one of these USMC surplus grid fleece pullovers last month from the Sportsman's Guide and have worn it a lot since then.  SPG has the best price I've seen on them in unissued condition.

I use it as an insulating layer under a windproof shell, either my First Spear Windcheater or German surplus flecktarn parka. I've also worn it as extra insulation under my Arc'Teryx Atom LT and SV hoodies on really cold days.

It's a light weight, half zip pullover that can be used as a base layer or on top of other layers. It is remarkably warm for its thickness and weight. The outside is pretty smooth but the inside is a polar fleece with a grid pattern in it that traps a warm air layer near your body. I just took a walk wearing it over a t-shirt and button down shirt, under the flecktarn parka on a walk around my neighborhood. It's 27 degrees and I was plenty warm.

The one I ordered is an XL. It runs a little big based on my sample of one. That's OK because as a pullover, it's more difficult to put on or take off compared with a full zip sweater, and the extra room helps.

Posted by Dave Markowitz at 9:33 PM No comments:

Some kind of wood processing tool is handy to have when camping and may be a necessity in a survival situation. Many woodsmen likes axes, hatchets, or large choppers, but a folding saw is a great alternative. Saws often weigh less, are more energy efficient, and safer to use.

For several years I've had a Gerber folding saw which was improved by using a saw set to increase the kerf and reduce drag when cutting. It's pocket sized and very easy to pack.

However, I wanted a longer saw that could still fit in a pack. Everything else being equal, the longer the cutting stroke the more efficient the saw. So, last month I got a Silky Bigboy 360 folding saw with large teeth. With a 360mm (14.1" blade) it's significantly longer than the Gerber. The rubber handle is easily grasped with both hands.

I finally got to try it out today on a branch I had in my firewood pile, and to trim a couple branches from a dogwood in my yard.

The branch from my firewood pile was of an unknown type of wood, possibly elm. It was well seasoned and hard. The Silky chewed through it like a hungry beaver. This took only a few strokes: 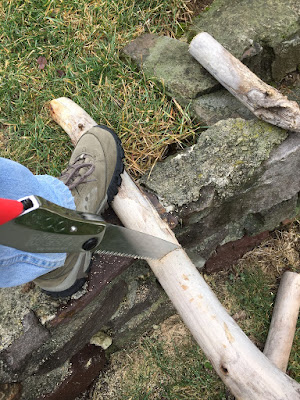 Dogwood is very hard and a good test of any blade. Although it required more effort to cut than the elm (?) branch, the Silky went through it very well. I'd like to test it on some softwood but don't have any. Based on Survival Russia's videos, I'd expect it to work damn near like a power tool.

The Gerber cuts on both the push and pull strokes. Silky saws, in contrast, cut only on the pull stroke. This allows the blade to be thinner and more flexible and doesn't really make it less efficient.

The Silky feels more robust than the Gerber. If I was in the market for a smaller folding saw I'd go with a Silky Pocketboy.

For some reason I recently got the hankering to try out a Russian veshmeshok ("kit bag") as a daypack. The veshmeshok is a very basic 30L (~1800 cubic inch) pack made from canvas, first adopted by the Imperial Russian army during the 19th Century. During the Inter-War period the Soviet Army adopted a more modern design, but placed the veshmeshok back into production during WW2, since it is so simple to produce. Production continued into the 90s, but I found one Russian web store which sells a "modern" version made of a Cordura-like nylon in camoflauge.

The veshmeshok is not much more than a canvas sack with a single outside pocket and four web straps that allow you to carry a rolled up greatcoat or bedroll. The top has a drawstring closure, probably made from hemp. But the single most distinguishing feature of the veshmeshok is the suspension, such as it is. There is one continuous shoulder strap which is also used as the closure for the top of the bag. The strap is 1.5" wide and lightly padded. It is attached at the bottom corners of the pack.

Lars of the Survival Russia YouTube channel uses a veshmeshok as his scouting pack and has a good video about it, here, in which he demonstrates how to rig the bag for carrying.  (Check out the rest of his videos, too. They're awesome.)

If you're in the US, veshmeshoks are easily available on eBay from sellers in the former USSR, but they're also available on Amazon Prime, which is the route I went.

My veshmeshok came neatly folded inside a surprisingly small box, complete with Soviet Surplus Smell. The date stamp inside the bag is faded but I think it says 1977. It's in unissued condition. The canvas is thinner than I thought it would be but it should be more than durable enough for my needs.

Because the veshmeshok is basically a 45cm x 67cm sack, you need to be careful loading it so that it doesn't turn into a ball, or you have things poking you in the back. So, the first thing I put in mine when I transferred the contents of my Hill People Gear Tarahumara over to the vesh was my Z-Lite seat pad. I unfolded the Z-Lite and used it as a back pad inside the pack.

Heavier items went in next, including an Esbit cookset and two Nalgene Oasis 1 quart canteens, one in a USGI cup. Then I put in my first aid kit, cordage kit, brew kit, TP with hand sanitizer and a trowel, a pair of gloves, and my BCUSA MEST poncho. Some disposable hand and toe warmers went into the outside pocket, along with a fleece beanie. My puukko got attached to one of the bedroll straps. Weight of the pack thus loaded was about 16 pounds.

I tried out the veshmeshok on a short hike yesterday. It was surprisingly comfortable with this load, since it's not much more than a string bag. 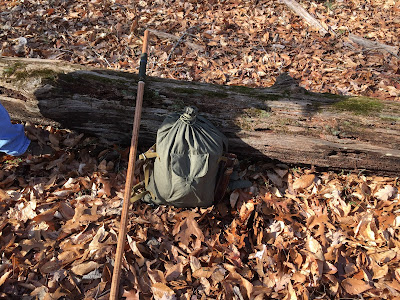 Adding a day's rations, another quart of water, and some kind of blanket or shelter would bump this up to around 25 pounds. It wouldn't be so comfortable at that weight, but the Russian Army has never been overly concerned with the comfort of its soldiers.

The short length of the shoulder straps was surprising. I am not a big guy although I have broad shoulders for my 5'4" height. With the shoulder straps set to their longest length they're just long enough for me to wear with a winter coat on. To make it a little more comfortable to carry, I added a loop of paracord at the midpoint of the strap and used that to close the sack, and put the pack into carry mode. I got that idea from this thread on BCUSA.

Additionally, the sternum strap is too short for me to make any use of it. It would need to be at least another 8" longer to be really useful. I may sew on some webbing to lengthen it.

You can fit a surprising amount of gear into a veshmeshok. For example, see this page at Operation Eastwind which shows the loadout for a Soviet reenactor.

The veshmeshok won't replace any of my modern packs but it may see use when I feel like going retro. One project I may try is pairing the veshmeshok with a Roycroft pack frame.
Posted by Dave Markowitz at 6:09 PM No comments: