Thankfully, the impact of Winter Storm Jonas on my area was limited to a crapload of snow. We got about 2 feet, plus or minus. (It's hard to get an accurate measure due to the drifting.) This was the 4th biggest snowstorm to hit the Philadelphia area since they began keeping records.

High winds were predicted for this storm but they didn't hit our area, and our power never went out. Because of the predictions I charged all the batteries for things like drills, radios, lanterns, and cell phone power banks. I also filled a Dietz hurricane lantern with lamp oil, but we didn't need either it or our kerosene heater.

A few things performed well during the cleanup:

1. Troy-Bilt Storm 2410 snow blower. I bought this in the Fall of 2014 as an upgrade from the smaller Troy-Bilt 5524 that I got in 2004. The extra size was very welcome with the amount of snow we got, especially when it came to clearing my driveway apron after the township's plow came through. The 179cc engine started easily even after sitting outside under a tarp in sub-freezing weather, and had plenty of power.

I am going to look into putting chains on the snow blower tires, however. The additional traction would be helpful.

2. ORC PCU Level 5 softshell pants. These remain one of the best items I've ever bought. They kept my legs warm and dry even when I had to wade through snow up to my thighs.

3. Arc'Teryx LEAF Atom SV Hoody + French Army MVP* CCE** surplus parka. The Atom SV provided plenty of insulation down into the teens and twenties when worn under the French parka, which blocked the wind and kept me dry, even when getting drenched with windblown snow from the blower. The French parka is available for $35 from keepshooting.com. If they have it in your size it's one of the best buys you can make. I'd rate it up there with any of the high end civilian GoreTex parks I've owned from Mountain Hardwear and Arc'Teryx, which cost A LOT more.

1. My father's vintage-2000 MTD snow blower (basically an older version of my Troy-Bilt) kept stalling due to a mix of old gas and new gas. Once it warmed up enough it was able to handle the mix.

2. However, to get to that point it had to be restarted. This was a problem when it stalled at the bottom of the driveway and the pull cord for the recoil starter broke when my brother tried to restart it. I had to drive over with a 100 foot extension cord so that it could be restarted. (My parents live around the block, so it was a short trip.) He'll be buying a suitably long extension cord, and replacing the starter rope.

3. I managed to get my Xterra stuck in front of their house when I pulled as far to the side of the street as I could. However, I remembered to toss a collapsible snow shovel in the back of the truck before I went over, so I was able to dig myself out in a couple minutes.


Notes:
* MVP = Moisture Vapor Permeable, like Gore-Tex.
* CCE = The French central European camo pattern, similar to US woodland but with more tan.
Posted by Dave Markowitz at 1:55 PM No comments:

With Monday off for MLK Day and the weather being mild for January in Pennsylvania, I thought that Saturday night would be good for a solo overnight camping trip in the Conrad Weiser State Forest Port Clinton Tract. I did an overnighter there with my daughter last Fall and we had a great time.

So Saturday morning I packed my gear and headed up to the forest around lunchtime. It's a little more than hour away. I arrived around 2:00 PM, hoisted my pack, and headed in using the same trail we used in October and when I went back for a day hike a few weeks later.

I hiked in further that our previous campsite, because on my last visit I noticed some standing dead trees a little too close for comfort. It took me about an hour to find a suitable spot off the trail that was level, away from widowmakers, and had two trees the right distance apart to support my tarp, but with enough room to extend the shelter back.

I setup the tarp with the back to the northwest, to block the prevailing wind. Rather than the lean-to pitch I've used before, I rotated the tarp so that I could extend the sides down to more fully enclose it. 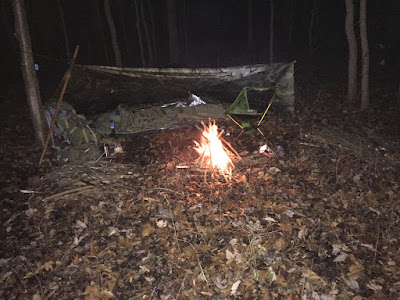 I like to pitch the tarp fairly low so it doesn't catch the wind and is stealthier.

For dinner I had some jerky and beef flavored ramen noodles in a cardboard bowl. Afterwards, the bowl went into the fire. 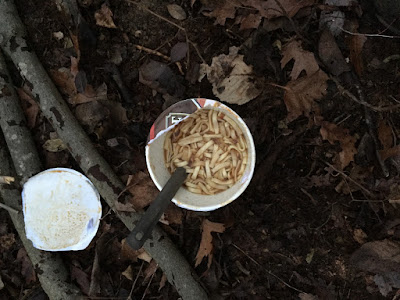 For boiling water I used my Stanley pot and Etekcity canister stove. The stove is light, cheap, and works well at least down to about 30 degrees. But if I'm planning to be out in lower temps, my Kovea Spider will be used instead. It can be run with the canister inverted and I also have an adapter to allow the use of 1 lb. propane cylinders.

The temperature was about 40 degrees F. during my walk in and until sunset. 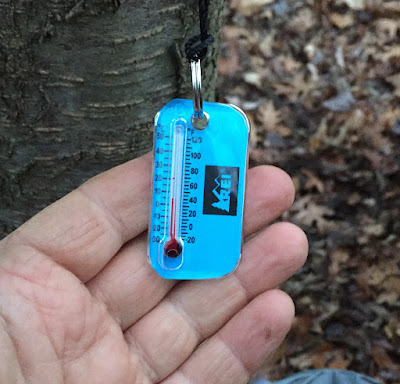 My bedroll consisted of:

My plan was to use the Mountain Serape as an overbag with the British jungle bag inside of it. I ran into problems with this, mainly related to the jungle bag. I've used the jungle bag before without issues, but that was in warmer weather. This time, I had on a fleece top that had a lot of friction with the inside of the bag. This made it very difficult to turn over, which is a problem since I'm a side sleeper.

Eventually, I decided to just unzip the jungle bag and the footbox of the Mountain Serape and use them as quilts. This was warm when they stayed on top of me, but the Serape kept slipping off the jungle bag whenever I turned over. I'm going to have to suck it up and get a light 20 degree bag. Suggestions welcome.

To compound matters, the Klymit Static V air mattress sucks for side sleepers. I'm going to return to using my Big Agnes air mattress. My daughter may like the Klymit better.

After tossing and turning for several hours I got up in the middle of the night and fixed myself a cup of hot chicken broth. By this time it was down to about 30 degrees and expected to drop a few more degrees. 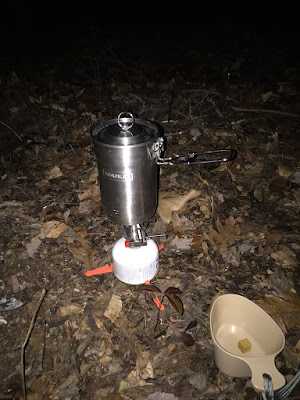 The stove is sitting on a Jetboil Fuel Canister Stabilizer. I found mine at REI but there's an Amazon link. It makes the canister stoves a lot more steady, especially when using the small diameter canisters. It will fit large fuel canisters, too.

Following a few minutes of considering what to do, I said <bleep> it and aborted the trip.

Striking camp when it's pitch dark is a bit more difficult than when it's light, but my headlamp worked well during this and the approximately 850 yard walk out.

Although I ended the trip early due to gear failure, the rest of my gear worked fine. A few standouts:

* Arc'Teryx LEAF Atom SV Hoody. I got this last week from SKD Tactical and I think it's my favorite jacket, ever. It was warm and stood up well to thorns. It merits its own post, which will be forthcoming shortly.

* Princeton Tec Remix headlamp. I mostly used the low power setting around camp, but when set to high it throws a nice beam. I used that when I was working my way back to my truck.

Seriously, don't go into the woods without a headlamp. The ability to work with both hands cannot be understated. I also used an inexpensive Cree LED single-AA light but if I could have only one, I'd keep the headlamp.

* Hill People Gear Kit Bag. I've had this now for a couple years and for me it's the most comfortable way to carry a gun in the woods. My S&W Shield with a spare mag is hardly noticeable. The KB also provides a secure, and easily accessed method of carrying a small survival kit, my car keys, and iPhone, which I used as a GPS. I kept the iPhone in the front zippered pocked of the KB and would stop every 25 or 30 yards to check it to make sure I wasn't walking in circles.

* The iPhone app Spyglass. It's a compass and GPS. Since I'm carrying the phone anyway, it's great to be able to use it instead of my Garmin. On our first trip to the CWSF I had marked my parking spot as a waypoint, which facilitated navigating back to the truck in the dark. (Yes, I had a compass and map. Spyglass is a lot easier to use, especially in the dark.)

* Hill People Gear Mountain Serape (medium). Whatever wind leaked around my tarp was stopped by the MS. Although it didn't work out so well as an overbag in concert with the British jungle bag, I can tell it'll make a great bag for 40 and above, or to carry on day hikes when I'm not planning to spend the night, but want something just in case. It's windproof and highly water resistant, so it could serve as both insulation and shelter. Like the Arc jacket, this merits its own post, which I'm working on.

Even though the trip didn't work out as I'd planned it was a good learning experience.

Posted by Dave Markowitz at 1:25 PM No comments:

This is a neat video from Survival Lilly showing how to create a tripwire-activated campsite alarm using a firecracker/noisemaker, matches, twine, and duct tape.


With a little work, this could be weatherproofed and a better mounting system could be devised. That said, this is a good starting point.
Posted by Dave Markowitz at 11:51 AM No comments: 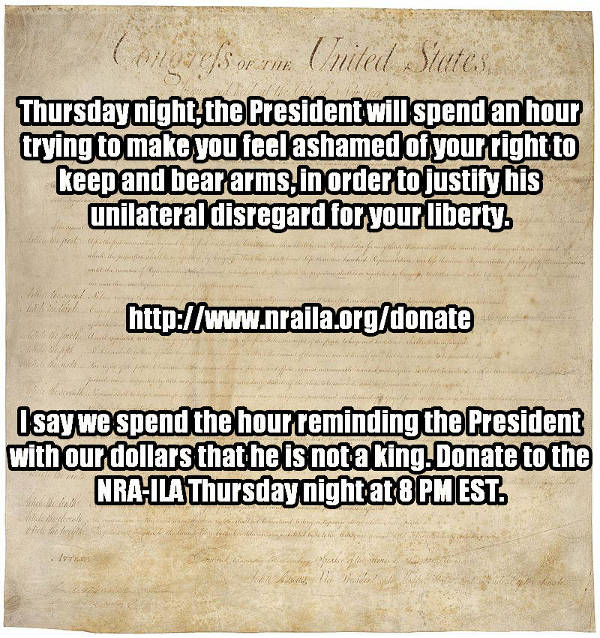 Posted by Dave Markowitz at 1:50 PM No comments: