This announcement was posted on March 1st by NKON, a large supplier of batteries in the Netherlands. (Link goes to FB so you might need to login to see it there.) 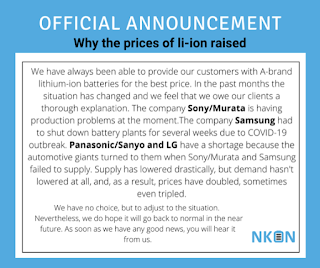 Most of my lithium battery supply is from Battery Junction. I've found that they often have better deals than Amazon.

Posted by Dave Markowitz at 10:01 AM No comments:

Cap and Ball Revolver: Round Ball vs Conical Bullet

This video from Paul Harrell provides a good comparison between round balls and conicals in percussion revolvers (in this case fired from a Ruger Old Army).

The conicals he used appear to have been cast from a Lee mold. They are similar in form to modern round nosed bullets that have been loaded in cartridges since the late 19th Century.

Conical bullets used in cap and ball revolvers in the 1850s and 1860s were generally more pointed. This would increase penetration but reduce terminal effectiveness because the bullet would be more prone to slip through tissue rather than punching a larger diameter hole.

In his book Sixguns, Elmer Keith recounted that Civil War veterans that he knew as a boy stated that round balls were more effective for antipersonnel use than the pointed conicals of the period.

Posted by Dave Markowitz at 1:42 PM No comments: