Last year I got an Esbit CS985HA cookset which includes two anodized aluminum pots, a pot stand, a Trangia-style spirit burner with snuffer lid, and a stand for burning solid fuel tablets. It also comes with a mesh storage sack. Overall, it's a lightweight and well-made little cooker which can be used with hexamine fuel tablets or alcohol.

In the picture below I've taken out the stove stand which nests inside the cookpot. In the stand I have the spirit burner and lid, the solid fuel stand, a bandana, matches in a Ziploc bag, and a bandana. I generally keep this all inside a plastic bag nested in the pot. 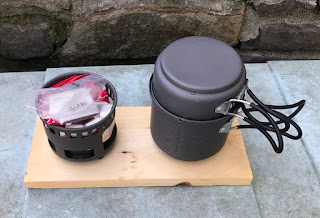 I've used it several times with the spirit burner, burning denatured alchohol and I've been happy with fuel consumption and boil times. However, I had not yet tried it with Esbit 14 gram hexamine fuel tablets, until yesterday.

However, everything is not equal. When using the spirit burner to boil water, it's more or less set-and-forget, until it's boiled. In the interest of science, I got out my Harbor Freight multimeter which can be used to measure temperatures with a thermocouple. (It also displays ambient temperature and relative humidity.) Hence the picture below, with a wire sticking out of the cookset: 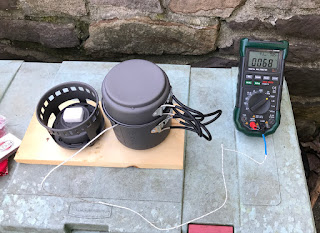 I should note that I tried a couple methods to light the first hexamine tablet. I wanted to see how viable it would be to light it with sparks from a ferro rod, so I used my knife to scrape some of the fuel to create a little pile of powder on top of the tablet. No dice. I then added some dryer lint on top, which easily took a spark but failed to ignite the hexamine. Next I tried sitting the tablet on top of a wad of dryer lint, which again failed to ignite it.

At that point I abandoned the ferro rod and lit the tablet with a match.

The ambient temp was about 70*F and the 16 oz. of water started at 68*. When the first Esbit tablet burned out after about 11 minutes, the water temperature was 172*. That's hot enough for coffee or tea, but I wanted to make ramen for lunch, and in any event, you need to cook the noodles for three minutes after the water boils. So, I lit another tablet and put the pot back on.

It only took a couple more minutes to bring the water to a boil. I dumped in the seasoning packet and noodles, and replaced the lid. A couple minutes later I had to remove the lid as the soup began to boil over. 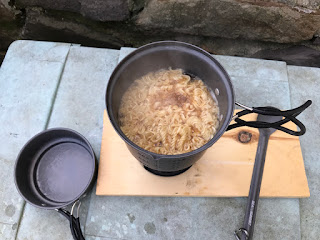 One reason I hadn't tried this cookset with the Esbit tablets is that based on past experience with hexamine, it leaves a sticky soot on your cookware. However, it appears that this stove burns the hexamine more efficiently than the older style folding Esbit cooker. Here's a pic of the stove on the left with the residue of two tablets and some dryer lint. On the right is the bottom of the pot. The residue on the pot wasn't sticky and later washed off with hot tap water.

A complaint many have about hexamine is the smell. The unburnt fuel smells like fish, and in an inefficient stove the stink is magnified. When I tried out this stove there wasn't much smell, indicates to me that it's burning efficiently. In contrast, the folding Esbit stoves stink.

To quantify any difference in performance between hexamine and alcohol fuel, today I repeated the experiment but used the spirit burner. Today both the ambient temp and water from the tap were a couple degrees warmer. Both ambient and water temp started at about 73* 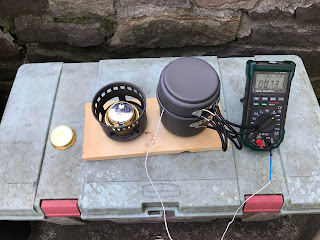 The spirit burner lights easily with a ferro rod; today it lit with one spark. The stove then takes a couple minutes to heat the fuel to the point where it vaporizes and comes out the holes around the rim.

One big disadvantage in my opinion is that even after the stove reaches full bloom, the alcohol flame is nearly invisible in daylight, unlike the flame from burning hexamine. In this picture the stove is lit and giving off noticeable heat: 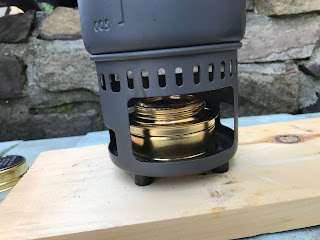 The alky burner took about 9 minutes to bring 16 oz. of water to a rolling boil. Even though the ambient and water temps started off a few degrees warmer today, that wouldn't account for the several minute shorter boil time. Even though hexamine packs more BTUs per pound than denatured alcohol, given this particular design, the spirit burner is more efficient.

I should note that boil times for both fuels would have been reduced had I used a windscreen to reduce convection loss and help reflect some heat back to the pot.

Based on this comparison I'm going to stick with denatured alcohol for most of my use. Esbit tablets are handy and will warm water enough for a cup of tea or coffee, and should work OK for heating a can of Vienna sausages in the small pan. However, the spirit burner is easier to light and snuff out, and appears to heat water more quickly.


Posted by Dave Markowitz at 2:50 PM No comments: