The Gun Culture of the Konyak Naga

I recently learned of the Konyak Naga hill tribe of northern India and Mynamar (Burma). Apparently, guns are a big part of their culture and they make them themselves.

The Konyaks' guns seem all to be single or double-barreled muzzleloading shotguns with percussion locks. They make their own powder and caps.

There are a couple Youtube channels with information about the Konyak Naga gun culture that I've been watching lately.

This video has an overview of their gun culture:

Target shooting at a pig's skull suspended from a tall pole (apparently the object is to cut the string holding the skull):

And this one shows how they make percussion caps:

Finally, this video shows how they make gun powder:

I find this fascinating just because I am into black powder and muzzleloaders, but it also gives a glimpse of what's possible with primitive tools, a lot of skill, and patience.

Posted by Dave Markowitz at 7:25 PM No comments:

The current crazy ammo supply situation has even extended to black powder shooting supplies, including percussion caps. Although I was able to pick up a 1200 count sleeve of RWS 1075+ caps from MidwayUSA earlier this year, I wanted a fallback option as well.  So, in early January I ordered a #11 cap maker and a packet of Prime All from 22lrreloader.com. It took about a month to come in due to their backlog.

To go with the cap maker I bought a 12" x 30" roll of .005" thick copper foil at Amazon. This is a bit thicker than the beverage cans recommended by the cap maker's manufacturer.

After the cap maker came in I punched out about 100 cups. I am able to do so by hand but it's much easier using a mallet. 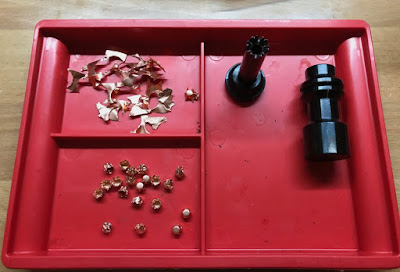 Anyway, the cups sat until yesterday. Instead of using the Prime All compound, I charged about a dozen with some Scheutzen 3Fg black powder topped with two toy caps, secured in place with a drop of Duco cement. It's a nitrocellulose laquer that acts as a binder, waterproofing agent, and is flammable.

I used a scoop made from a large pistol primer cup glued to a piece of bamboo from a chopstick to put the black powder in the caps. 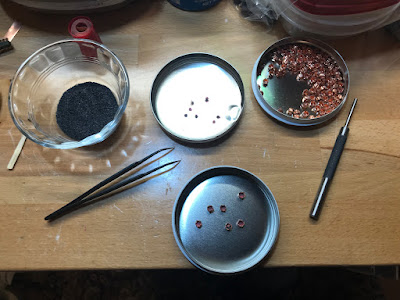 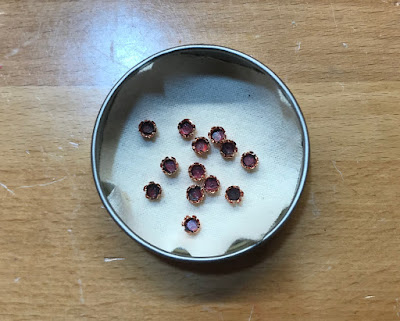 Last night I tried the caps in my Euroarms Rogers & Spencer. I used them with Triple 7 as the main charge. I wanted to see how they'd do with a propellant that has a higher ignition temperature than black powder.

They worked pretty well. The first cylinder was charged with 20 grains by volume of Triple 7 3Fg, a lubricated wad, and .454 ball. All chambers ignited easily and the caps didn't fragment.

I then tried some paper cartridges with the same powder charge and ball but with 0.5cc of cornmeal filler. These must develop a higher chamber pressure, because I noticed that the gun was harder to recock due to the caps deforming more. Also, in this cylinder I had one misfire where the cap popped off but the main charge failed to ignite. It went off with a second cap but there was a noticeable delay. I think the nipple was clogged. 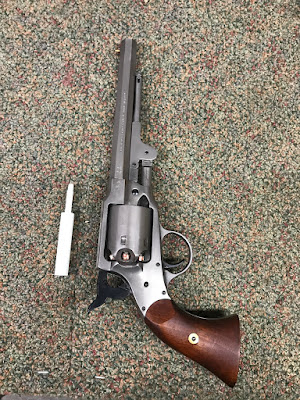 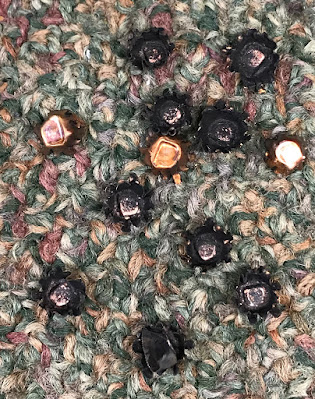 I regard this experiment as a success. I'm getting a 1/8" hole punch so I can more easily get the toy caps off the paper roll, which will speed production. I also need to try the Prime All compound.

Making percussion caps is tedious. I don't expect to make a whole bunch but I want to have the capability, just in case.

Posted by Dave Markowitz at 7:09 PM No comments: