A couple years ago I bought my first article of clothing by Arc'Teryx, an Atom LT Hoody. I've been incredibly happy with it. It weighs about one pound but keeps me warm down into the low 40s, and makes a great mid-layer when combined with an outer shell. It's also super packable, which is very handy when adding it to a bag for a trip, or when I wear it to work on a cool morning but want to shove it in my laptop bag for the trip home.

However, I wanted a warmer jacket that would still be packable. Last Fall I picked up an Eddie Bauer 700 fill power down jacket that is pretty nice, but the hood bugs me when I try to wear it over a ball cap. It simply isn't large enough. So, back in January I ordered an Arc'Teryx LEAF Atom SV Hoody in Wolf grey from SKD Tactical. It got to PA from MO in two days. SKD is probably going to get more of my business. 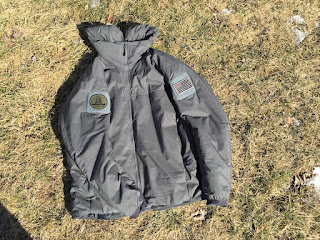 Arc'Teryx calls this jacket a hoody but don't compare it with a sweatshirt. This is an insulated technical jacket that is filled with 100gsm Coreloft with a wind and water resistant shell. The jacket weighs a little more than a pound. 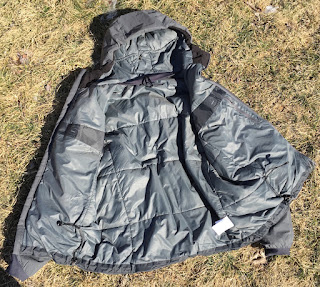 "LEAF" is Arc's Law Enforcement and Armed Forces line. Arc LEAF items are built with a bit more durable material and have a fuller cut, which is good for me since I'm not exactly athletic. I ordered my normal t-shirt size, XL, and I find it pretty true to size.

As with my other pieces of Arc'Teryx gear, the workmanship is top-notch. The stitching is exceptionally well done, there were no loose threads, and it looks sharp.

The LEAF Atom LT has a generously-sized hood that can be cinched down with a shock cord accessible from the back, and one on either side of your face. The shock cords and cord locks are concealed by fleece panels that prevent them from rubbing your face. This keeps them neat but does make it more difficult to adjust with just one hand. When not in use the hood can be rolled up and secured with a loop and toggle. 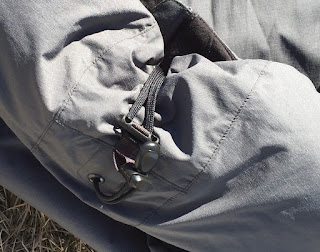 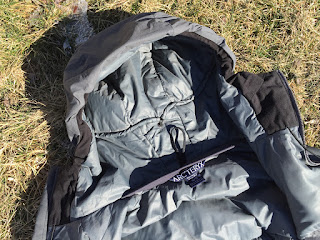 Likewise, the bottom hem can be tightened against wind via shock cords. These are also captured in tunnels, unlike in every other jacket I've seen. This prevents them from snagging on items on your belt, like a holster, or on things you brush against. Simply brilliant. 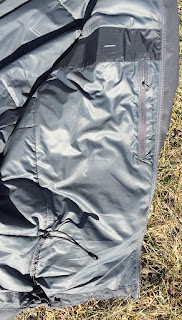 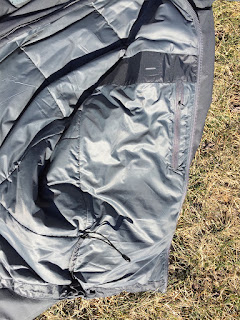 The jacket has three pockets -- two large handwarmer pockets and one internal left chest pocket. All are zippered.

There are inside ports on both handwarmer pockets that allow you to route earbud or microphone cables from a device up through the inside of the jacket.

Since the LEAF line is marketed towards law enforcement and the military, the upper sleeves have Velcro patches. While I'm neither, I figured that I'd adorn the jacket with a couple -- an American flag that I bought with the jacket, and a Gadsen patch in Hebrew that I got from Zahal.org.

The cuffs are a light, stretchy material that seals out drafts but is light and dries quickly. They are the same as on the Atom LT.

I've had the Atom SV now for about a month am very pleased with it. I've been wearing it as my winter coat during my daily commute with temps down into the teens. When it dips down to 20*F or below I'll add a light fleece underneath. (I'd expect to get too warm with the fleece if I were active, but my commute consists of a two mile drive to a train station, then a half hour ride on a commuter train into town. I.e., pretty sedentary.)

The outer shell is more robust than the shell of the Atom LT. It's highly wind resistant and the DWR finish shrugs off light snow and rain. Despite the light weight of its outer layer, it's durable. I wore it on a January overnighter in a Pennsylvania State Forest, when I had to abort in the middle of the night due to unrelated gear issues. While walking out to my truck I had to do some bushwhacking, which included going through some thorns. I thought for sure that I'd just trashed a $270 jacket, but nope. Remarkably, the Atom SV showed no signs of wear when I was able to inspect it in daylight.

For cold, dry conditions, the Atom SV works well as an insulating layer under a German surplus flecktarn parka. I tried this combination while getting my snow blower ready for Winter Storm Jonas. The temp was 23* F. with a wind chill of about 11*. That's pretty cold for those of us living in SE Pennsylvania. The inexpensive German parka adds further protection against stains and tears, while extending a windproof layer down to your thighs, and has a good camo pattern if you need it. Underneath I wore jeans, a t-shirt, and a Duluth cotton flannel shirt. After being outside for about 20 minutes and mildly exterting myself I started needing to vent. It's a good combination.

As good as the Atom SV's shell is, it's is still a synthetic. Care is warranted if you'll be spending time around a campfire, and an outer layer like the German parka, a British smock, or similar cotton or wool shell would be a good idea to prevent the Arc hoody getting holes from sparks.

The only changes I'd make would be to add a left side Napolean pocket on the outside of the coat and move the inside pocket to the right. I like stashing my phone in a Napolean pocket since it's easier to access while seated in my truck or on the train.

Overall, I am extremely pleased with both SKD Tactical's fast service and the Arc'Teryx Atom SV Hoody. It's a light but warm jacket that will serve for the vast majority of my winter coat needs.

In my previous post (q.v.), I listed the contents of each pocket of my Hill People Gear Original Kit Bag. Since a picture is worth a thousand words, this post should be worth about 6,000 and change.

First, the zipped up Kit Bag and then the back compartment with my S&W M&P Shield 9 and a spare magazine. When worn, the pistol doesn't move at all, but I will probably buy a kydex holster that covers the trigger guard.

If you click on each pic you should get a full sized version. 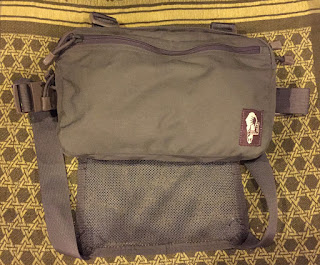 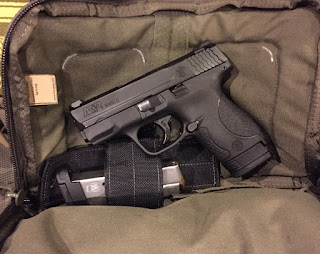 Next we have the middle compartment with an assortment of survival gear. 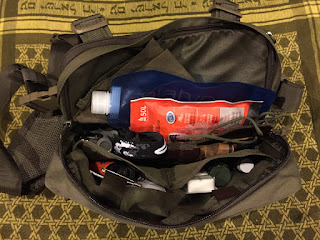 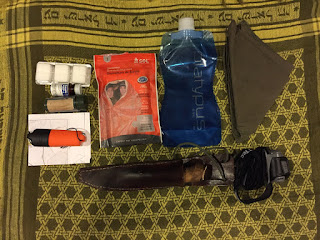 Finally, the outer compartment with a few more items. This is where I stow my keys and iPhone. It provides easy access to the phone without having to worry about everything falling out when I'm consulting the phone's GPS. 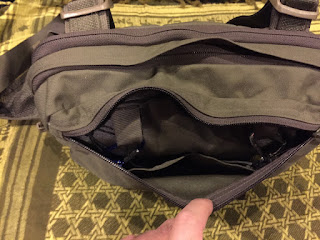 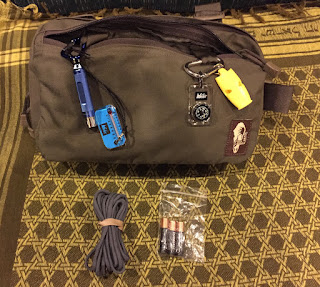 Posted by Dave Markowitz at 6:25 PM No comments:

A couple years ago I bought a Hill People Gear Original Kit Bag. This is the gear that lives in it 24x7. I use the bag on day hikes and overnighters. I have found the Kit Bag to be the most comfortable way to carry a pistol while hiking when carrying a pack. It also provides a very convenient and comfortable means of carrying a basic survival kit, and an easily accessible but secure way to carry my car keys and phone when off-pavement.

I augment the contents as dictated by the particular trip. E.g., add a Cliff bar or two.

(The gun and spare magazine are loaded with Federal XM9001 9mm 115 grain JHP. In PA, I'm not worried about wild animals larger than dogs. The gun is there for defense against people. I've also carried a Beretta M9 and a CZ P-09 but switched to the Shield to reduce weight.)


Items marked with an asterisk are dummy corded to light aluminum caribiners with bank line. I replaced the Slick Clips that came with the KB with the 'biners because they are easier for me to open and close.

Once I get to the trail, I'll stow my car keys and iPhone 6 in the outside compartment. Depending on the trip I may also bring a larger compass and a Garmin GPSMAP 62 GPS unit, but not necessarily in the KB.

Also, I removed the Grimlocks from the outside of the KB, since I don't use them.
Posted by Dave Markowitz at 3:11 PM No comments: