Over on Blog O'Stuff, I've been writing about a Cimarron Firearms Uberti 1873 Sporting Rifle that I bought in March, along with handloading .44-40 ammunition for it. The gun is a replica of the Winchester 1873, "The gun that won the West."


Although it's a 19th Century design and by modern standards it's considered an obsolete weapon, one advantage these old guns and replicas thereof is that they can be kept going with low tech reloading methods. Ammunition can be loaded for these cartridges on modern equipment or with simple hand tools.


A modern reloading press like my Lee Classic Turret press is a lot more efficient than the hand tools. The hand tools are slow and don't allow you to resize fired brass, so it can be used only in the same gun in which it was first fired. That said, with a hand tool you can put together a portable, complete reloading kit that will fit in a toolbox. Perhaps the best of both worlds would be a Lee hand press, which uses standard reloading dies.

If chambered in one of the original centerfire rounds -- .44-40, .38-40, or .32-20 -- they are ideally suited for use with black powder or black powder substitutes like Pyrodex or Triple 7 and cast bullets. (Modern replicas are also available in .45 Colt, .357 Magnum, and .44 Magnum, all of which work great with cast bullets but don't seal the chamber as well when used with black powder, because of their thicker brass.)

This is an original Winchester Model 1882 reloading tool that I got off eBay, along with the original matching bullet mold. (The mold isn't pictured.) 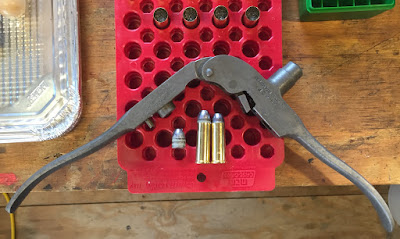 This tool can perform the following functions without any adjustments:


Under the tool, from left to right are a 200 grain bullet cast from the original mold, a charged case with bullet pressed in ready to be seated and crimped, and a complete cartridge. Above the tool are some cases charged with 35 grains of Swiss 3Fg black powder. The bullet was cast from reclaimed plumber's lead and lubed with a mix of beeswax, mutton tallow, and canning paraffin. There are other black powder compatible lubes you can make at home, e.g., a 50/50 mix of beeswax and Crisco.

During the panics of the past eight years, black powder and BP substitutes remained largely available. In extremis, black powder can be made. There is plenty of info available online on how to do so, just be careful.

Primers are one component that tends to disappear quickly when panics hit, and cannot be easily made or reloaded, so it would be wise to stock up ahead of time.

Likewise, if you are setup to cast your own bullets, if you can obtain a suitable lead alloy and make some kind of bullet lube, all you need to worry about stocking up on are cases and primers. As of the time this was written (April 2016) cases for these "obsolete" rounds are easily available in quantity online. The primer supply is good now, too, either online, in stores, and at gun shows.

As a side note, the capacity of these leverguns is 14 + 1 for the 24" barreled rifles, or 12 + 1 for the 20" carbines. Either one has more firepower than a pump shotgun, with a lot less recoil, and a longer effective range.

In my opinion, the ability to load cartridges using components that you can get in times of scarcity or make yourself has value for preppers. It's something to consider if the rest of your preps are squared away.

Posted by Dave Markowitz at 8:46 PM No comments:

This morning a friend and I drove down to the Newcastle, DE Ham Radio Outlet, where I bought a Signalink USB, the jumper module to configure it for my Yaesu FT-817ND, a Diamond RH-707 folding HT antenna, a BNC-to-SO-239 jumper cable, and an MFJ-4103 A/C adapter for the FT-817ND. After getting home I set everything up in my den. Please ignore the clutter. 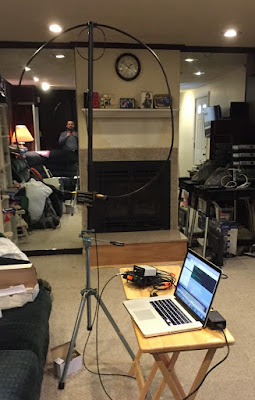 The antenna is a 7 to 30 Mhz AlexLoop. A lot of QRP operators favor one. I haven't used it enough to decide if I like it or not.

Setup of the SignaLink was pretty straightforward. 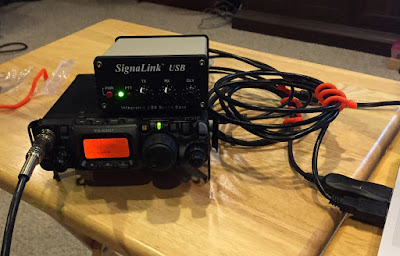 Once everything was hooked up I changed the rig from VOX to PSK31-U data mode, and in Fldigi, selected the USB AUDIO CODEC for sound input and output.

Below, I'm monitoring a PSK31 QSO in Fldigi.

I played around with this setup for about an hour and was able to receive several signals. I called CQ but did not make any contacts. I gave up when 20M died.

I was impressed with the ease of setting up the SignaLink and wish that I'd bought one awhile ago. It's easier to adjust than the internal sound card.

The MFJ-4103 power supply looks like a good buy, also. It looks like a laptop power supply and would be a good choice for anyone traveling with an FT-817ND or using one as a base station where there is 120VAC power.

Posted by Dave Markowitz at 3:23 PM No comments:

Last week I got a Valley Enterprises FTDI chipset-based programming cable for my Yaesu FT-817ND. This is a USB version of the Yaesu CT-62 serial cable used for rig control and programming.

I took today off to finish my income taxes and after I was done I decided to play with the cable. I already had an FTDI driver on my MacBook Pro, so I was able to just plug it in, connect it to the radio, and use it to program the rig using CHIRP. I also tried it with Fldigi and once I selected the correct driver in the config screen, it worked. If I put the rig into memory mode and manually selected the frequency it immediately showed up in Fldigi. Likewise, if I used Fldigi to change the frequency it worked on the radio.

Tomorrow I'm planning to head down to Ham Radio Outlet and pick up a Signalink USB, among a few other things. The Easy Digi interface I have now works but it's a rat's nest of cabling. The Signalink USB should reduce the clutter and simplify setup and teardown. Combined with the Valley Enterprises cable I tested today, it should make digital mode operation a lot easier.
Posted by Dave Markowitz at 3:41 PM No comments: