I've been on a knife-buying binge lately.

A few weeks ago I picked up is a carbon steel Terävä Skrama bush knife from Varusteleka. Previously, I have noted that a big chopping knife isn't really required in my neck of the woods, but damn, sometime they are fun to play with. The Skrama is a well-made, modern take on the seax. The specs for the Skrama, courtesy of Varusteleka: 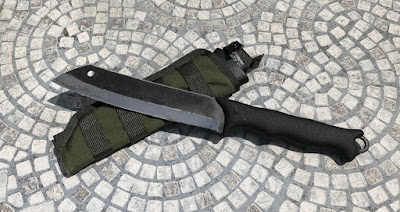 IMO, it's as advertised. I used it to trim some branches in my yard after touching up the edge and it cut through them well. Afterwards, the edge didn't need attention. Check out the demo video on Varusteleka's site.

More recently, I picked up a few folders, one from Amazon and a couple from MidwayUSA since I had a gift certificate.

The knife from Amazon is a classic Buck 110 Folding Hunter, to which I added a brass Kwik Thumb stud to facilitate one-handed opening. I'd wanted to get an add-on stud like this a few years ago for my old Schrade LB-7 Bearpaw but couldn't find any. Now that they're available again I grabbed a couple. 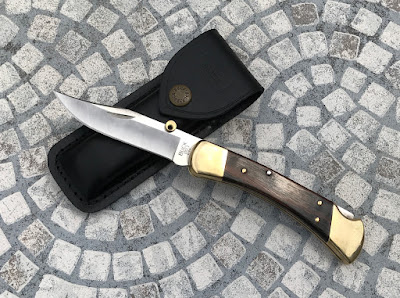 It's a basic Buck 110 with a blade made from their 420HC stainless steel hardened to Rc 58. It's a bit strange that guy closing in on 50 with a lifelong interest in knives has never owned a Buck 110, but the Bearpaw filled that niche for me for years.

IMO, a good quality folding lockback knife like the Buck 110 can serve the same purposes in the woods as a fixed blade knife like a Mora, but is easier to carry on your belt. I carried the Bearpaw for several years on my LBE when I was in a Civil Air Patrol ground SAR squadron and it handled all my cutting tasks just fine. Mated with a folding saw and a smaller knife like a SAK, and you'll be well equipped for the woods in most of North America.

The Kwik Thumb stud works as advertised to let you open it one-handed but due to the Buck's stiffness, it's not nearly as easy or fast to open as my Benchmade Griptilian, for example. Still, it's a worthwhile addition. Note: the set screw that holds it in place on the blade is tiny. If you drop it odds are it'll disappear into the Zone of Lost Things (don't ask how I know). I used a drop of blue Loc Tite to make sure it stays in place.

Next up was another Victorinox Classic, this time with yellow scales and emblazoned with a Gadsden logo. The blades/implements are made from the same stainless steel that Victorinox uses in their entire Swiss Army Knife line. I've found it to be rust-proof in EDC in the city and 'burbs and have never seen corrosion in the woods. Compared with a lot of modern "super steels" it's soft, but I haven't had a problem with edge retention, and it's easy to resharpen without anything fancier than a bench stone. 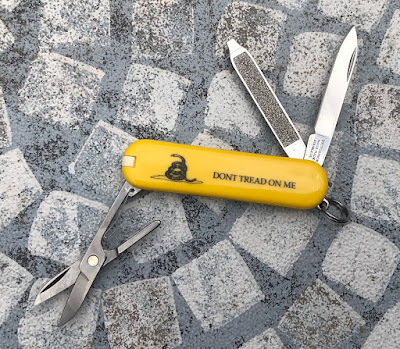 The Classic is a tiny knife but still quite useful, plus it's not just a knife. In my experience the scissors, tweezer and nail file with a screwdriver tip all come in handy. I clipped an eGear Pico light to it. They carry very easily in a pocket with minimal bulk.

The final knife in the binge is a Boker Tree Brand Beer Barrel Stockman. I've never owned a stockman knife before and this is a really nice one. The knife was made in Germany with scales cut from beer barrels. The blades are C-75 carbon steel hardened to Rc 57-59, which is pretty hard for a carbon steel. 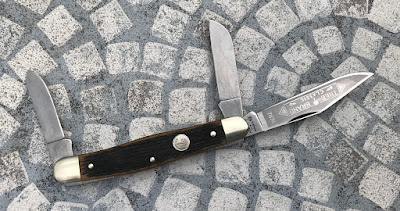 This is my second pocketknife from Boker, the first being a barlow. Fit and finish is perfect. The three blades offer a lot of utility for an outdoorsman:

The clip and sheepsfoot blades open easily. The spey is stiff but loosening up as I play with it. The blades do not half half-stops, so a little more care needs to be exercised when closing them.

This is a really nice pocketknife that will find a home my EDC rotation.

All the knives' edges needed some attention out of the box. The Skrama came pretty sharp but I did some touch up on my Spyderco SharpMaker.

The Buck 110 had a burr on the edge that needed a good amount of work on the SharpMaker to get rid of.

The DTOM Classic needed the least attention. Every other Victorinox I've bought (which is many) came shaving sharp out of the box. This one needed a minute or two of polishing on the SharpMaker using the fine sticks to get shaving sharp.

The Boker's blades needed the most attention and I will be doing a bit more work on them. They'll cut paper but just barely shave. I had to take a break because my SharpMaker's sticks were getting gunked up (not just from these knives, but I haven't cleaned them in awhile). 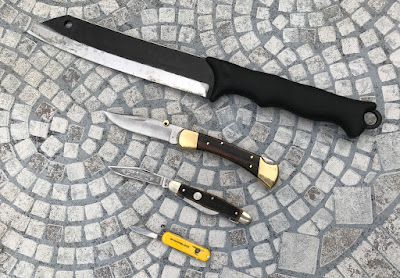