Last weekend I primed 25 Magtech brass 12 gauge shotgun shells and on my lunch break today I finished loading them. The details: 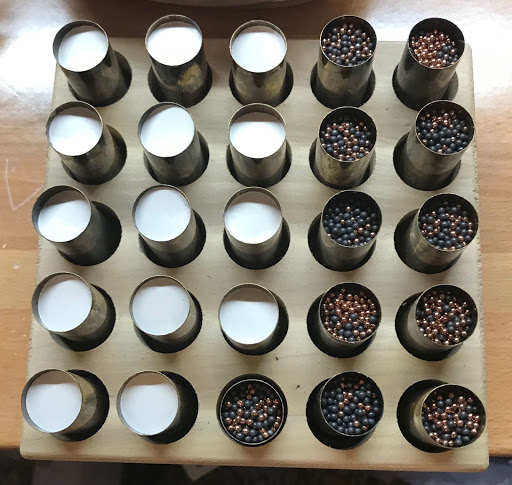 Magtech hulls require the use of oversized components because the case walls are thinner than 12 gauge plastic or paper hulls.

The felt wads were punched out of 1/8" thick wool felt with a .75" punch, then soaked in a mixture of 50/50 beeswax/mutton tallow. This is to help keep powder fouling soft.

The shot is a mix of plated that I bought from Rotometals, along with some unplated shot scavenged from miscellaneous promo loads. No. 7.5 shot is primarily for clay busting but it will work on doves, as well. Otherwise I'd load No. 5s for small game hunting.

I'll let the Duco cement cure overnight before boxing them up.

These will be good for informal clay target shooting. They shoot well in my Russian-made Baikal MP-310 over/under. Cleanup in a chrome-lined smoothbore isn't bad.

Posted by Dave Markowitz at 1:07 PM No comments:

The week before Labor Day, my electrician finally completed installation of a generator transfer switch in my house. Afterwards, he saw the Champion generator that I'd bought on sale at Cabela's several years ago and pointed out that I needed one that outputs 240V, so that I can power both legs of my home's wiring. The Champion puts out 120V only.

I will be donating the Champion to a friend's Civil Air Patrol squadron, which can use it for a mobile communications center they are building.

So, last week I ordered a DuroMax XP4850EH dual fuel (gasoline/propane) generator from Amazon. A friend has this model, has used it during power failures, and recommended it. It was about $707 on Prime and came on Saturday.

For anyone in CA, it's CARB-compliant, BTW.

It arrived damaged. One corner of the box had been smashed in then taped up. Upon inspecting the generator, a sheet metal cover was dented and the frame was scuffed. Nothing major appeared to be broken, so I went ahead and installed the wheels and feet. 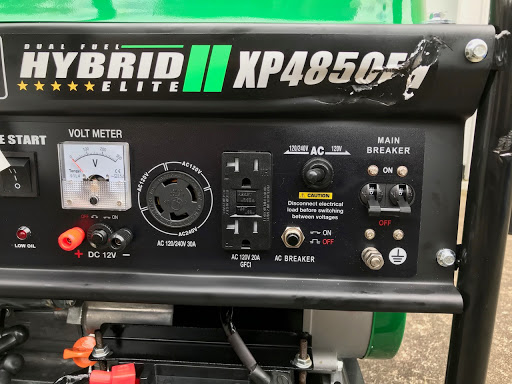 Yesterday I added 20 oz. of 10W30 motor oil, connected the battery, and connected a propane tank for a test run. It fired right up. At least on propane, it seems a little quieter than my old Champion, which is nice.

Afterwards, I was able to get ahold of a human at Amazon, explained the situation, and asked for a credit since it was a scratch and dent. I did not ask for a specific amount. After waiting a few minutes on hold, the CSR came back and offered me a credit of $262.55, with the option of an Amazon gift card or putting it back on VISA. Heck yeah! I told her to put it back on my VISA.

My plan is to primarily rely on propane to fuel the generator. I can keep a few propane tanks around easily. Propane has an indefinite storage life and isn't as messy as gas. It doesn't pack as many BTUs as an equivalent amount of gasoline and the generator's output is lower with it, but if I know a hurricane is coming I can also go out and fill a couple of five gallon jerrycans with gas. The longest power outage that we've had that I can recall was about two days. <knock wood>

But I have an even better story from a friend. About 5 or 6 years ago, he bought a generator from Amazon. When it arrived, it did not work. This was during the holiday shopping season. He contacted Amazon to do an exchange and they told him to just keep it, and then they sent him a replacement.

He did some googling, figured out what part he needed to fix the bad generator, and got it up and running for $12.

He wound up with two generators for the price of one + $12.

Posted by Dave Markowitz at 7:12 AM No comments:

Keeping my Nissan Xterra on the Road

Last Saturday when I got up to our campsite in Tioga County my two friends who I met onsite smelled antifreeze from my 2007 Nissan Xterra after I pulled into camp. My sense of smell sucks, to put it mildly, and I didn't smell anything. We popped the hood and after the engine cooled down, checked the antifreeze level. Sure enough it was low. One of my friends had a gallon of premix so we topped it off. (Given the age of the vehicle I should have been carrying some.)

We also noticed that a hose going from air cleaner to the engine was cracked. I'm now carrying some Rescue Tape (self-fusing silicone tape) in my truck toolkit in case any other hoses crack.

The joys of owning an older vehicle. 😐

Yesterday, I brought the truck to a local mechanic who confirmed that it has a leak, so I had him replace the radiator. It must have been a very small leak since the truck didn't overheat either way on the trip (about 240 miles each way).

I've actually been thinking of getting this done to prevent the Xterra Strawberry Milkshake of Death from happening, anyway. The Xterras were designed with an automatic transmission fluid cooler integrated with the radiator. Unfortunately, sometimes there's a failure which allow cross-contamination between antifreeze and ATF fluid, causing the SMOD, which kills the transmission. It's both a clever and dumb design.

Although my truck is 13 years old it only has 110,000 miles on it, so I'd like to keep it for several more years, therefore replacing the radiator is worth it to me.

Posted by Dave Markowitz at 1:37 PM No comments: