A Canoe Gun by Jackie Brown, and Muzzleloaders for Survival

Over on Blog O'Stuff I've already posted about this, but this post will have a different slant.

I bought this "Canoe Gun" (really just a short version of the Indian Trade Gun) at Dixon's Muzzleloading Shop last weekend. It's a 20 gauge percussion smoothbore. It was built by Jackie Brown. As a southpaw I could not pass it up. 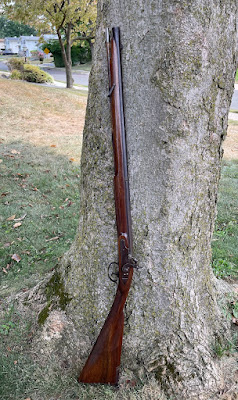 I made a sling for it from a cowhide shoulder I had.

Some measurements I took:

The lock is a large Siler. The barrel has a slight flare at the muzzle end. It may be slightly coned on the inside. The front and only sight is a trade gun-style turtle. It has a large Siler lock and the nipple is sized for No.11 caps. A .580" ball will drop freely down a clean barrel all the way to the breech.

I got a chance to shoot itthe next day over at a friend's place. He has some land and we can shoot safely in his yard. Unfortunately it was raining and the only place I could load while under overhead cover was his patio. I'd then step out to shoot and some tin cans we placed on a hillside.

My load of 1 oz. of #5 shot on top of 65 grains of Scheutzen 3Fg black powder penetrated both side of a #10 can from about 20 yards, so it's got enough power for hunting.

I also tried a couple varieties of ball loads. I shot a half dozen .570 balls loaded in paper cartridges on top of 65 grains of powder. I also tried a few shots with .575 balls loaded on top of a tow wad, with another tow wad over the ball to hold it in place. The balls loads shot high with how I was holding the gun.

Recoil with both the shot and ball loads was very mild. I plan to try some heavier charges.

I absolutely need to put both shot and ball loads on paper.

Everything went mostly well until the gun fell over onto the brick patio, landing on the hammer which was set to half cock. That broke the half cock notch on the tumbler. (Insert vast amounts of profanity here.)

When I was done I used tow wrapped around a worm to scrub the bore. This was the first time I've tried using tow for cleaning and it works pretty well, much like a bore brush. I'll be using it at least for my smoothbores in the future. This is what tow looks like when wrapped around the worm. There's no reason you can't use it in a modern shotgun. It can even be washed and reused. Once it's worn out you can use it as tinder. You can make the equivalent by cutting a 4" to 6" length of hemp, sisal, or jute rope and unraveling it. 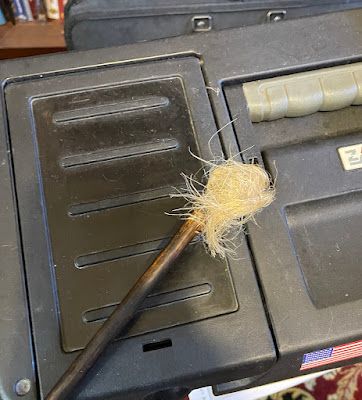 The primitive worm I use is just a coil of wire that winds onto the end of my ramrod. It works like a Chinese finger trap and doesn't easily come off. 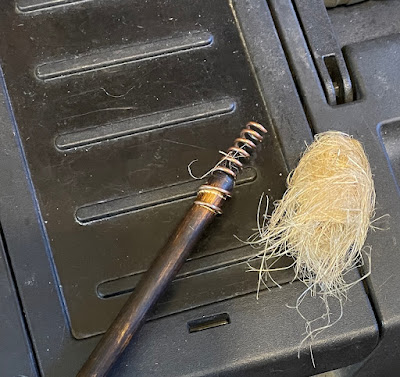 After getting home I ordered a replacement tumbler from Track of the Wolf and I paid extra for 2 day delivery. My order arrived today and I repaired the lock after work. It took about a half hour with some needle files to fit the new tumbler to the hammer. I also cleaned up the side of the tumbler that rubs against the lock plate, using a stone. The hammer now clicks solidly into both the half and full cock notches.

I may be going upstate next weekend and if so I should be able to pattern shot loads and figure out how to hold it when shooting ball.

OK, Dave, I know you're saying. Why consider a muzzleloader for a survival gun? Sure, when these guns were originally made they were used for real as survival guns, but it's 2022 now.

For a long term/TEOTWAWKI survival gun a muzzleloader has some advantages, IMO:

I'll have to do a separate, more detailed post on the caplock vs. flintlock for a survival gun.

Of course it's nowhere near as good as even a single shot breech loader for defense but it still beats a sharp stick or harsh language. You are far from unarmed with one of these.

Posted by Dave Markowitz at 7:11 PM